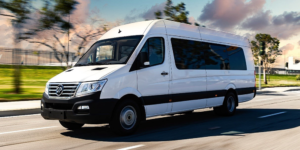 GreenPower Motor has received an order for four wirelessly charged EV Stars electric vans from Grant Transit in the US state of Washington. The four GreenPower EV Stars ordered by Grant Transit are the first to include Momentum Dynamics’ wireless charging system.

Ryne Shetterly, VP of Sales and Marketing at GreenPower, says: “The fact that we are seeing orders outside the state of California speaks to the success that GreenPower has had in terms of market outreach and we expect this trend to continue. Our partners at Momentum Dynamics played a significant role in winning this deal, and we look forward to further collaboration in the future.”

Green Power was founded in 2010 with “the vision to advance the adoption of EVs by making battery-electric buses and trucks affordable, durable, and easy to deploy,” as the company says. The North American company designs, manufactures and sells all-electric commercial vehicles to transit authorities; electric school buses, electric transit buses, electric double-decker bus and electric cargo vans (i.e. vanpooling, micro-transit, shuttles). The company’s flagship GreenPower EV Star is a purpose-built, zero-emissions, mini-bus capable GreenPower’s EV Star shuttle bus featuring a 118 kW Li-Fe-PO battery, which is estimated to be good to carry up to 19 passengers for a 150 mile (280 km) range.

Not only is the electric commercial vehicle-maker at the forefront of electric vehicle development with wireless charging, in December last year, GreenPower announced that they delivered a fully autonomous EV (A-EV) Star to Jacksonville Transportation Authority. The vehicle called the AV Star was developed in collaboration with Perrone Robotics. The company said they expect to enter full level 5 autonomous service with JTA this year.

Brendan Riley, President of GreenPower, says that the company has a significant competitive advantage in their ability to deploy Buy America compliant units that leverage federal funding. He explained: “This is the first order reflecting years of strategic planning, including undergoing additional prerequisites for federal funding such as the EV Star’s completion of rigorous Altoona testing.” He added,  “Along with incorporating progressive solutions such as wireless charging, we are very well positioned to meet the demand for all electric vehicles as the economy reopens, much as we did with Grant Transit.”