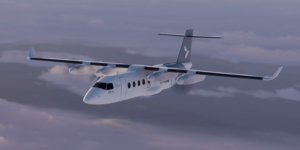 Finnair, Finland’s national airline, has expressed interest in procuring up to 20 electric aircraft from Heart Aerospace for use on short-haul routes. Heart Aerospace is a Swedish aerospace start-up based in Gothenburg.

Both sides signed a letter of interest these days. The two companies know each other from the Nordic Network for Electric Aviation (NEA), which was founded in 2019. This northern European consortium has set itself the goal of advancing the development of electric aviation. With the potential fleet procurement, Finnair and Heart Aerospace are now moving forward in the spirit of the consortium.

Heart Aerospace is currently developing the ES-19, an electric aircraft for 19 passengers with an expected range of 400 kilometres, which is to be introduced commercially in 2026. However, there is still a lot of work to be done in terms of aircraft construction and certification. “We are pleased to have signed the expression of interest,” said Anders Forslund, CEO of Heart Aerospace. Finnair’s climate targets are among the most ambitious in the airline industry – “and we believe that our electric aircraft can play an important role in creating zero-emission regional transport”.

According to Anne Larilahti, Finnair’s Vice President of Sustainability, Finnair believes that electric aviation is becoming one of the tools for the future of flying. “It will help promote responsible and sustainable aviation, especially on short routes at a time when climate change will increasingly dominate the agenda.”


Finnair, along with Scandinavian Airlines and Icelandair, are considered heavyweights in the Nordic Network for Electric Aviation. The other eight founding members of the network are Air Greenland, Avinor, Braathens Regional Airlines, El-fly, Heart Aerospace, NISA (Nordic Innovation Sustainable Aviation), RISE and Swedavia. The Nordic Innovation organisation, a body responsible for promoting cross-border trade and innovation under the so-called Nordic Council (a forum of the Nordic countries), acts as the coordinating body.

To date, the members of the consortium have defined the following main areas they want to work on: standardising the infrastructure for e-aircraft, developing business models for regional point-to-point connectivity between Nordic countries, developing e-aircraft technologies for Nordic weather conditions and creating a platform for European and global cooperation.

Initial progress in the field has already been made in the far north. For example, Norwegian company OSM Aviation placed a massive order for commercial electric aircraft in April 2019: It ordered 60 battery-electric aircraft from Colorado-based US manufacturer Bye Aerospace to be used for training at its flight training centres. The Norwegian domestic airline Widerøe also plans to replace its ageing fleet of turboprop aircraft with electric aircraft for its short-haul routes from 2026. To this end, it is cooperating with engine manufacturer Rolls-Royce and aircraft designer Tecnam. An electric aircraft called P-Volt with nine passenger seats will be used.