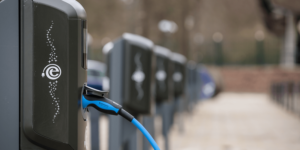 The largest theme park in the Netherlands, Efteling, has opened the most extensive charging park for electric cars in the Benelux countries (the Netherlands, Belgium, Luxemburg) in collaboration with Eneco. After the current lockdown, up to 174 electric cars will be able to recharge in the car park at the same time.

Although the energy company Eneco has not said what type of charging points these will be, they are likely to be cheaper AC chargers. DC fast chargers would be unnecessary since the charging points are expressly designed to charge electric cars while drivers are spending a few hours at the theme park.

“Eneco and Efteling are meeting the growing need for charging facilities for electric cars,” says Joris Laponder, CCO at Eneco eMobility. “Visitors to Efteling can charge carefree during their visit. The charging stations are therefore not only a sustainable investment but also an additional service for Efteling visitors.”

The theme park aims to be completely carbon neutral by 2030. “The creation of these additional charging stations fits perfectly with this goal,” says Fons Jurgens, CEO of Efteling. “I am very proud that we have the largest charging station in the Benelux!” Jurgens also says that the park will reopen “in a responsible way” as soon as possible.

Eneco says that the charging points will be exclusively fed by renewable energy sources from European solar and wind power plants.