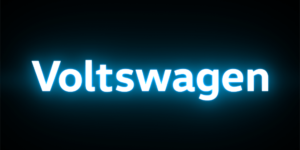 Volkswagen of America is being renamed Voltswagen of America. In future, electric cars in North America will have a modified logo with light blue instead of dark blue. The change is to be implemented from May 2021, or so it appeared.

++ This article has been updated. Kindly continue reading below ++

We usually put updates below an article, but you should see the update to this article straight away this time. This heads-up announcement is one we would have liked to see from Volkswagen – the below “news” of VW America being renamed into Voltswagen America has turned an April Fool’s joke – only two days early. This, in fact, makes the whole story into a PR disaster as it breaks unwritten rules of spreading such “fake news” humorous as they may be on 1 April and 1 April only. Moreover, Volkswagen even lied to the media that suggested that the joke had come early this year. However, in the spirit of an early tomorrow, please find the original news below and let’s say they got us good or a little too far ahead of themselves.

VW’s US subsidiary has now announced that renaming itself into Voltswagen of America is more than just a name change; it is “a public declaration of the company’s future-forward investment in e-mobility”.

“We might be changing out our K for a T, but what we aren’t changing is this brand’s commitment to making best-in-class vehicles for drivers and people everywhere,” says Scott Keogh, president and CEO of Voltswagen of America. “The idea of a ‘people’s car’ is the very fabric of our being. We have said, from the beginning of our shift to an electric future, that we will build EVs for the millions, not just millionaires. This name change signifies a nod to our past as the peoples’ car and our firm belief that our future is in being the peoples’ electric car.”

The announcement was apparently brought forward on the spur of the moment: CNBC had reported the name change based on an incomplete press release that was accidentally published, which was, of course, quickly picked up on across the globe. The date of the press release suggests that this was more of a PR glitch than a PR coup: according to CNBC, it was dated 29 April, which would have fitted in with the name change to be completed in May. Now the world knows about the plans a month earlier.

Update 30 April 2021: The fake renaming of the VW Group in the USA to “Voltswagen” could have legal consequences. According to a report in German publication Der Spiegel, the US Securities and Exchange Commission (SEC) is investigating whether Volkswagen may have influenced the stock market price through the PR stunt. The investigation is still at an early stage.

When asked, the company confirmed to the magazine that the SEC had requested information from the US subsidiary Volkswagen Group of America. VW is cooperating with the responsible authorities.

But even internally, the failed PR stunt has not yet been fully dealt with. Apparently, it is still being examined whether internal group guidelines were violated. The press release that has been published in the meantime is probably the main focus, as it has cost trust, writes “Der Spiegel” with reference to company insiders.

This article was updated as above as a previous version had suggested the name change could be real.