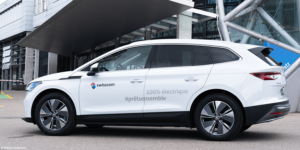 Telecommunications group Swisscom maintains one of the largest company fleets in Switzerland, comprising of around 24,000 vehicles. The Group now decided to progress electrification and to include all-electric cars for the first time. Swisscom opted for the new Škoda Enyaq e-SUV by the Volkswagen Group.

Electrification is not new to Swisscom; 20 per cent of the fleet are hybrid vehicles, around 480 cars. The now acquired 100 Škoda Enyaq electric vehicles are just the next step on the route to a low-emission fleet. Swisscom wants half their company cars to be battery-electric or powered by hydrogen by 2025 before transitioning to zero-emission mobility entirely by 2030.

Swisscom claims to be the first Swiss company to switch to electric vehicles on this scale. That is only partly true, as Swiss parcel service provider Quickpac currently has 176 Renault Kangoo Z.E. vehicles in operation but not the same ambitions.

Saskia Günther, head of Swisscom’s sustainability team, justifies the current timing for integrating the first purely electric vehicles by saying that “Up to now, no vehicle has been capable of meeting our operational requirements. The Skoda Enyaq is the first electric vehicle on the market to fulfil all of our demands and which can replace existing cars on a like-for-like basis.” In the case of commercial vehicles (mainly panel vans and transporters), the Group intends to continue “waiting for the launch of suitable models,” she said.

Swisscom does not disclose whether and to what extent it plans to install charging infrastructure at the Group locations. An accompanying press release states that Swisscom would contribute to the private charging station’s installation costs at the homes of employees’ homes.

Swisscom AG is the largest telecommunications company and one of the largest IT companies in Switzerland. The group is headquartered in Worblaufen near the capital Bern and employs nearly 20,000 people. Since summer 2020, Swisscom AG considers itself a climate-neutral company, with around 20 per cent of emissions offset by external climate protection projects.

With reporting by Cora Werwitzke, Fleets.