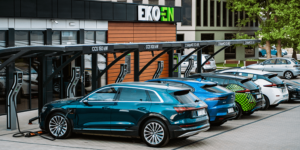 Ekoen has announced the construction of 100 fast-charging locations in Poland, each of which will include several fast and ultra-fast charging stations as well as a lounge and café for waiting times. The Polish startup wants to explicitly focus on the convenience of electric car drivers when charging.

Ekoen is a company led by Bartosz Kubik, one of the co-founders of Ekoenergetyka-Polska, which specialises in charging infrastructure for electric buses. The charging hardware for the new network will also come from this same manufacturer. By working closely with Ekoenergetyka, Ekoen says it will ensure that its future charging locations are always equipped with the latest charging technology.

Ekoen wants to stand out with upgraded locations that feature a driver’s lounge and cafés open around the clock. “The e-mobility market is entering a new phase,” notes CEO Bartosz Kubik. “E-mobility market is entering a new stage. Users will no longer accept a lone charger on a dark carpark that is too often out of order and has no facilities to satisfy the most basic needs. I know, because I am this user. And that is why we created Ekoen”

A prototype station has already been in operation since the beginning of 2020 in Zielona Góra, near Ekoenergetyka’s headquarters. Apparently with great success: Ekoen reports that in 2020 alone, they served almost 10,000 vehicles there.

The Polish company also wants to do business beyond their home market. Ekoen says that their charging stations will not only be the key to accelerating electromobility in Poland, but also in Europe. The goal, of this company and others, is to “democratise” electromobility by offering the fastest, most convenient and space-saving charging solutions on the market.

For its part, Ekoenergetyka-Polska is better known for the electrification of bus depots than for the installation of public charging infrastructure for passenger cars. But there are case studies for the latter. For example, Ekoenergetyka is one of the selected hardware suppliers for the expansion of the charging network at PKN Orlen petrol stations. The product portfolio consists of bus chargers with an output of up to 600 kW, car charging stations with an output of up to 350 kW and charging hubs with outputs of up to 2.2 MW. In the future, a new series of charging stations for electric commercial vehicles will also be added, which will initially be introduced at test locations in Germany and Poland by the end of 2023.

According to the manufacturer’s own figures, it has put around 1,200 charging stations into operation in more than 130 cities in 18 countries to date.