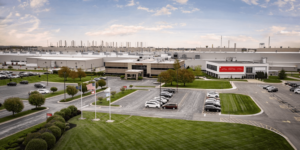 Toyota has announced investments of 803 million US dollars and 1,400 new jobs in its Princeton car plant in the US state of Indiana to prepare for the production of two new electrified SUV models.

The investment amounts to the equivalent of 663 million euros. The Japanese company has been building vehicles at the plant since 1999, currently the Sienna MPV and the two SUV models Sequoia and Highlander, the latter also as a hybrid since 2014.

One of the two three-row SUVs is destined for the Toyota brand, the other for Lexus, according to the announcement. Toyota is not yet giving further details on the type of electrification: the vehicles are to be announced “at a later date”. The only thing that is clear is that the two models, with their three rows of seats, are to offer space for up to eight passengers and have been “developed specifically for the active American Gen Y family”.

In February, Toyota had announced that it would bring three new electrified models to the US market this year: two BEVs and one PHEV. One of the BEVs, however, will be imported from Japan, according to earlier reports. That the remaining BEV and PHEV will be the two Princeton models is not confirmed, nor is it likely: Toyota is not giving any details about the timetable for the expansion.

Toyota did not reveal many details about the plant conversion itself in the press release. It is true that about 1,400 more employees are to be added to the 7,000 already working at the site. The Japanese company also does not give a figure for future capacity; at present, the plant can build about 420,000 vehicles per year at full capacity, however.

It is also unclear where exactly the expansion for the two electrified SUVs will be built: The factory, called “Toyota Motor Manufacturing Indiana” or TMMI for short, consists of two parts. The two SUVs Sequoia and Highlander are built in the original “West Factory”, the van Sienna is produced in the “East Factory” – and due to the high demand, the Highlander since 2016.