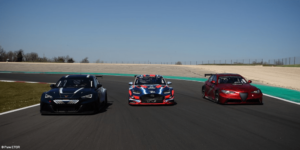 The Pure ETCR electric touring car series will officially become an FIA World Cup from its second season and then be called the FIA eTouring Car World Cup. The 2021 season starting in June will still be held under the old name.

For the racing series, this means a formal upgrade. The race series will be organised by the promoter Eurosport Events, which belongs to the Discovery Group – until now as a private race series. With the sanctioning of the Automobile World Federation as a World Cup, the series will be officially recognised from next year. Under the FIA label, the ETCR should also become more attractive for getting manufacturers involved in the racing series.

“We are thrilled that the Pure ETCR will become the FIA eTouring Car World Cup from 2022,” says Francois Ribeiro, head of Eurosport Events. “The automotive industry is rapidly moving towards electrification, and we are working incredibly hard in partnership with WSC to build the world’s first all-electric touring car series with racing and innovation at its heart and offer car manufacturers a platform to showcase their electric production vehicles in intense, authentic on-track battles that touring car fans love.” Peter Bayer, Secretary-General for Sport at the FIA, added: “This new concept is sustainable, relevant for manufacturers and fans, and the innovative format guarantees action-packed events.”

The race cars are based on road cars but come up to 500 kW after conversion. So far, the Seat subsidiary Cupra and Hyundai are participating as manufacturer teams and private teams with their own developments, such as the Italian team Romeo Ferraris with a converted Alfa Romeo Giulia.

The Pure ETCR wants to start its premiere season in June with an event in Vallelunga (Italy). This season is to comprise five races – four in Europe and one in Asia. With the classification as a World Cup, the further internationalisation of the race series should start.

“We are honoured to be the powertrain technology partner to the ETCR family and to power every car in PURE ETCR. MAGELEC Propulsion designs and manufacturers lightweight, high-torque axial flux (aka ‘pancake’) electric motors and power electronics packaged with Omni Gear transmission systems,” said Craig Daniel, CEO and Founder of MAGELEC Propulsion, adding: “We have created a robust 500 kW torque-vectoring drive unit that maximises the tractive force and acceleration capabilities for the ETCR platform. The engaging PURE ETCR race format is a fantastic demonstration of electric vehicle technology and demonstrates the compelling performance they deliver.”