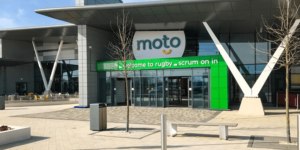 Motorway service station operator Moto has confirmed plans to install ultra-rapid EV chargers at all its UK sites. The installations will form part of the Electric Highway, which is among the oldest fast-charging networks in the UK.

Moto had kickstarted the initiative just days ago with the opening if of the largest high power charging site in the network. Rugby Services at Junction 1 of the M6 now offers a total of 24 ultra-rapid chargers capable of delivering up to 350kW. The initial twelve Electric Highway chargers are now next to a dozen Tesla Superchargers.

A further 24 HPC units will each be installed at Reading, Thurrock and Exeter. By the end of the year, 28 Moto sites are set to have ultra-rapid chargers. By 2022, Moto says it will have at least six ultra-rapid chargers at every UK site as part of a long-term, £100 million investment programme. This also includes an upgrade to all existing 50kW chargers by the end of this July for greater charging power ahead of increased ‘staycation’ traffic.

The strategy resembles similar advances in motorway charging on the continent. Ionity usually installs six high power charging stations at its sites. We have also seen combinations of HPC and Tesla at large fast-charging stops in Germany, such as the Kreuzhilden site.

In the UK, the Electric Highway was founded about a decade ago under green utility Ecotricity and CEO Dale Vince. He added: “Moto is a founding partner of the Electric Highway, and this is our first ultra-rapid installation, which comes at a tipping point in the adoption of electric vehicles.” Vince also pointed to the new partnership with Gridserve announced in March.

The partners plan to install over 100 ultra-rapid charging parks. Gridserve took a 25 per cent stake in Electric Highway and is contributing technical expertise to upgrade the charging network, which has been criticised for issues since the start of installations in 2011. In a recent ZapMap survey, the network came in last as reported.

The first step to improvements involves replacing all existing charging stations on the Electric Highway with new multi-chargers (CCS, CHAdeMO and an AC charging option) at which drivers can pay contactless. This project is scheduled for completion this summer. The second step involves said upgrades to up to twelve high-power charging points with a capacity of up to 350 kW at each location.