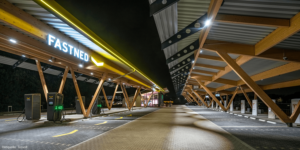 Only eight months have passed since Tesla, and Fastned first announced their plans to install “Europe’s largest charge park” on a site managed by Roland Schüren. The man owns a bakery chain and has become synonymous with privately initiated e-mobility in Germany.

On the charging park off the motorway leading to Düsseldorf, a lot has happened since Tesla first built 16 temporary Superchargers there, that they had dismantled again in time for the (re-)opening on Thursday. What was revealed had nothing to do anymore with a dire parking lot and a sales booth from Roland Schüren’s bakery. Instead, we saw a modern charge park with much higher quality.

Two large solar roofs span the charging area. Seen from the entrance, the Superchargers line the left-hand side (with white elements on the roof), while Fastned occupies the right side with their stations designated in yellow. Another row without a roof includes the AC charging stations (partly with a fixed cable), where you can not only pay with the usual charging cards, but also with the Giro-e.

The eponymous ‘Seed &amp supplements the charging park; Greet’ concept for travel stops by Bäcker Schüren. Drivers can not only buy water, coffee or fresh rolls during the charging process but also eat pizza baked on-site during longer charging sessions.

During the opening ceremony, representatives from Tesla and Fastned emphasised the strategic location of the site near the intersection of the A3 and A46 motorways, the populous region around Düsseldorf and many commuters between the Rhineland and Ruhr area. “This is why we have one of the largest supercharger parks in Germany with currently 20 charging points,” said a Tesla spokesperson. In the final expansion stage, Tesla is planning to install 40 Supercharger stalls.

They had also said in previous communication that they would add the latest V3 Superchargers in Hilden. But in fact, only 12 of the 20 stalls are the latest generation, and the remaining eight stalls are still V2 – probably also thanks to Roland Schüren. As a Model S driver, he did not want to exclude older Tesla vehicles from the charging park. It remains to be seen whether the remaining 20 stalls will only be V3 or whether Tesla will add further V2 charge points.

Also, when seen from the Dutch side, that is Fastned, the company’s 125th charging site is strategically well-positioned. The Hilden junction is an important stop in long-distance traffic for the Benelux countries. The A46 motorway connects the Venlo and Eindhoven region with the Rhineland, the A3 from Arnhem and the nearby A57 from Nijmegen are crucial routes for the Dutch. And from the Hilden junction, the A3 continues along the southern part of Germany and Europe.

“Here we have a large scalable charging park with the highest standards of quality and sustainability,” says Fastned CEO Michiel Langezaal in our interview. The Dutch fast-charging company set up four Alpitronic Hyperchargers for the opening. The columns have two CCS charging points with 300 kW each and a CHAdeMO connection. Since two of the connections per column can be used simultaneously, Fastned currently offers eight charging points.

Why has Tesla 20 charging points for only one brand and Fastned only eight for all other brands? “It’s a start, and we have to make a start somewhere,” said Langezaal. But one thing is also clear: for Tesla, investing in Superchargers is part of the sales strategy for their vehicles, but for Fastned, it is a tough business. And one that has become profitable after all. The Dutch company generated positive EBITDA of EUR 0.5 million from operations for the first time in 2019.


Besides, once demand and capacity utilisation increase, Fastned can expand rapidly in Hilden: Seven additional sites are prepared, and up to eleven charging points will then offer 22 fast-charging points. Overall, Langezaal is satisfied with the Hilden location and the cooperation with Tesla and Roland Schüren. “The charging park is great, I am very pleased about that”, says Langezaal. “But at the same time it is also far too little, we as a company will need hundreds of such facilities in the future if we want to charge significantly more electric cars in the long term.”

There are also plans for an office building with a vertical greenhouse located between two building blocks. Extending over 1,000 square meters and four floors, the bakery wants to grow salad, strawberries and blueberries there.

Which policies are most effective to decarbonise transport?