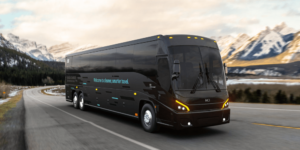 New Flyer reportedly had acquired MCI in 2015 as it looked to enter the intercity bus market in the US and Canada. The deal was worth 455m dollars at the time and appears to continue to reap collaborative fruits by now. New Flyer is part of the NFI Group and serves as its e-bus outlet.

“NFI has pushed EV and automated innovation forward, and today we achieve another milestone in our technology roadmap through the launch of MCI’s first battery-electric luxury coach,” said Paul Soubry, President and Chief Executive Officer, NFI.

MCI says the new e-bus was perfectly suited for use by tour and charter, employee shuttle, and executive coach operators and that it retains “the luxury and passenger experience that has defined MCI for decades.” Said lux in the J4500 Charge is mainly expressed through brighter and more spacious interiors with “industry-leading” legroom, claims the company.

“We successfully completed prototype testing of our J4500 Charge in 2018, and since then have continued rigorous field testing of MCI’s battery-electric performance to prove operation through virtually any condition,” said Brent Maitland, MCI’s Vice President of Private Sector Sales and Marketing.

One such field test was completed by Germany’s FlixBus that tested the electric bus on the longer distance between San Francisco and Sacramento in California as reported. “Testing the first all-electric coach in America is not only a huge milestone for FlixBus but the travel industry as a whole,” said Michael Kahn, Head of Business Development at Flixbus USA back in 2019.

The NFI Group includes New Flyer as its electric bus brand and subsidiary MCI. The Group also owns the Scottish bus builder Alexander Dennis Limited since 2019. ADL is known above all for its double-decker buses and also cooperates with BYD on electric buses, mostly in the UK.