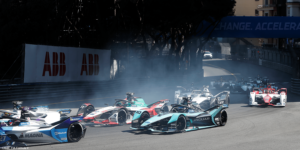 Current Formula E champion Antonio Felix da Costa secured his first win of the season at the seventh race of the electric series in Monaco in his DS Techeetah. The Portuguese racer won ahead of Virgin driver Robin Frijns and Mitch Evans in the Jaguar.

The energy management, much criticised during the chaotic race in Valencia, made for an exhilarating race in Monaco. Jaguar driver Evans had been in the lead for much of the race, but energy consumption became a problem for the New Zealander in the final minutes. In the last lap of the race, da Costa in the DS Techeetah passed Evans first in the swimming pool passage, and in the sprint to the finish line, the New Zealander still lost second place to Frijns.

After the Monaco race had to be cancelled last year due to the effects of the pandemic, there was a novelty this year: For the first time, the ePrix took place on the traditional Formula 1 track of Monaco. At the previous Formula E races in the principality, a short version was used.

Even before the final laps, there were numerous exciting racing scenes. As the Formula E racing cars are made for narrow city circuits, unlike Formula 1 cars, there were numerous overtaking manoeuvres. The lead alone changed five times after an overtaking manoeuvre. Jaguar driver Evans delivered an impressive action here, making the most of his “Attack Mode” (250 instead of 200 kW power is released for four minutes): On the narrow uphill section to the casino, Evans was able to overtake da Costa spectacularly on the outside.

Maximilian Günther in the BMW i Andretti took fifth place behind da Costa’s team-mate Jean-Eric Vergne. The Monaco race was a disappointment for the other German drivers and teams: Audi driver René Rast retired after an accident. Porsche driver Pascal Wehrlein also failed to finish after contact with the crash barrier. His team-mate André Lotterer crossed the line in ninth place but dropped back to 17th at the end due to a time penalty for a collision. The two Mercedes-EQ drivers Stoffel Vandoorne and Nyck de Vries also retired.

Annoyingly for de Vries, the Dutchman lost the World Championship standings to his compatriot Robin Frijns. Frijns has 62 points, while the Mercedes driver remains with 57 points. Jaguar driver Mitch Evans (54 points) is in third place, while Monaco winner da Costa has moved up to the fourth place with 54 points.