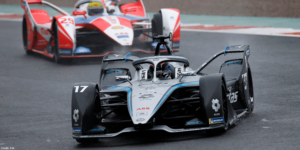 Mercedes driver Nyck de Vries and BMW driver Jake Dennis won the two Formula E races in Valencia. Especially the Saturday race with the Mercedes victory caused discussions: Only nine of the 24 cars were scored in the end, as many drivers ran out of energy.

Normally, the Formula E only uses the Circuito Ricardo Tormo near Valencia for winter test drives. Since the planned race in Paris could not take place due to the Corona measures, Formula E planned two ePrix in Valencia – the first-ever Formula E races on a permanent racetrack.

It was already clear in advance that energy management, which is important in Formula E anyway, would become even more important on the permanent racetrack than on the otherwise usual street circuits. Nevertheless, Saturday’s race was turbulent: In the rain, there were several slips (into the unfamiliar gravel bed) and accidents, which resulted in a total of five safety car phases.

After the last safety car phase, the current champion Felix Antonio da Costa in the DS Techeetah looked like the sure winner. However, as the race lasted one lap longer than expected – more on that in a moment – the Portuguese and numerous other drivers ran out of energy on the last lap. Some sneaked around the course and managed to make it to the finish – but as they used more energy than allowed in the process, they were taken out of the classification. In the end, Mercedes-EQ driver Nyck de Vries won ahead of Nico Müller (Dragon / Penske Autosport) and Stoffel Vandoorne in the second Mercedes. Only nine of the 24 drivers who started were classified in the end.

To ensure that energy management remains the decisive factor in the race, in Formula E the permitted amount of energy is reduced for every minute that the field drives behind the safety car. This is to prevent that after a few energy-saving laps behind the safety car, the race can be finished without considering the energy management. With the five safety car phases, the permitted amount of energy was thus severely restricted. In addition, a Formula E race currently lasts 45 minutes and one lap. Antonio Felix da Costa, however, crossed the line after 44 minutes and 45 seconds – so there were still two laps to go. Many teams had assumed that there would only be one lap left and had therefore misallocated their amount of energy. Mercedes, however, handled the situation correctly, putting both cars on the podium despite poor grid positions.

In a less eventful race on Sunday, BMW driver Jake Dennis won – in just his sixth Formula E race. The Briton was ready to go from first on the grid and dominated the race. Second was André Lotterer in the Porsche ahead of Alex Lynn in the Mahindra. However, Lotterer and Lynn benefited from a time penalty for Norman Nato in the Venturi, who had crossed the finish line in second place, but had caused a collision earlier in the race.