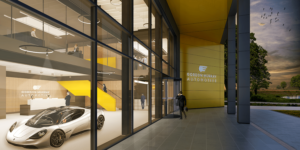 Gordon Murray Group has announced plans to develop its own electric car platform for small cars and vans. This is part of a 300 million pound investment plan for the next five years.

Utilising the equivalent of around €350 million, the investment plan aims to position the company for the future – and that includes electric vehicles for urban use. A new Gordon Murray Group global headquarters and technology campus in Windlesham is to be built from July this year. The first part is scheduled to open in 2022. The entire project is due to be completed in 2024.

“The future of the car is increasingly electrified and it is important that we develop the lightest, most efficient and advanced electric vehicles in the world,” said company founder Gordon Murray. He revealed that work on the electric platform is underway and promised that more information will be released soon.

Murray told Autocar magazine that the Gordon Murray Design division will develop a “highly flexible skateboard platform” and the first vehicles will be in the B-segment. These will be a small SUV (primarily for private customers) and a compact van for commercial use.

According to Murray, the SUV will be less than four metres long, which would make it comparable to a VW e-Up. However, Murray emphasises the utility of his vehicle, saying it will be “more of a practical small car than a small city car”.

When asked if the technology will be sold to other firms as it has done previously, Murray answered: “We’re doing it a bit differently. Rather than offering licences, where clients were required to pay all upfront costs, we will adopt something closer to a franchise system, where we use part of the £300 million we’ve earmarked for investment to develop a fleet of prototypes that clients can see and drive before making a commitment. Then, of course, they can modify them for size, styling and function. But all the iStream advantages will still be there.”

Another subsidiary, Gordon Murray Electronics, was founded for the electric platform. This is to develop components and find partners so that the electronics, motors, batteries and inverters can be lighter and more compact. “We believe our B-segment design has the potential to cut current all-up weights by about a third,” Murray said.

As yet, details of the planned vehicles are rudimentary. Murray has not yet revealed any details on the planned price of the electric car. The small car segment is considered to be particularly price-sensitive, especially for commercial use. The question will be whether a particularly advanced and lightweight electric car can be attractively priced.

Gordon Murray is a South African engineer who became known through his work in Formula 1. There he built, among other things, the Brabham BT46B (nicknamed “hoover”), with which Niki Lauda won a race. Later, his cars also won the world championship. After moving to McLaren, where he also developed the McLaren F1 road sports car. Murray remained at McLaren until 2055 and then went into business for himself with Gordon Murray Design.

Despite the movement towards electric mobility, the company is still catering to fossil fuels: From 2022, the Gordon Murray T.50 is to be built in small series, a super sports car with a naturally aspirated V12 engine limited to 100 units. The price is 2.6 million euros net. As Murray told Autocar, a second V12 sports car is to follow – with a “very loud” hybrid.

including reporting from Sebastian Schaal

Hyundai announces plans to manufacture EVs in the USA