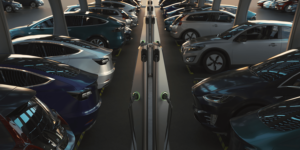 Franklin Energy wants to install a 236-bay electric vehicle charge hub at Brent Cross Shopping Centre in North London, potentially making it the largest facility of its kind in the UK. The hub will become part of Franklin’s LiFe Network and use chargers by EVBox.

Franklin Energy will install and operate the hub and expects completion no sooner than by 2026. The chargers will be supplied by EVBox and installed over several phases. Initially, 50 charging points with 22kW will be installed in the shopping centre’s multi-storey car park and two ultra-rapid units (350 kW) in the Western car park. These will be completed by the end of 2021.

Brent Cross Shopping Centre is a large shopping centre in north London. The centre is located by the Brent Cross interchange and attracted 15–16 million shoppers a year as of 2011. Co-owned by Hammerson and Aberdeen Standard Investments, the new charging hub will be Hammerson’s ninth destination to offer charging points.

Franklin Energy says that the hub will not only benefit existing customers visiting the centre but will also provide charging points for cars passing by on the nearby M1, A41 and A406 via the North Circular, which, pre-pandemic, recorded about 80 million cars passing through Brent Cross’ interchange every year.

Franklin Energy’s LiFe Network is expected to have 5,000 public chargers by 2025.