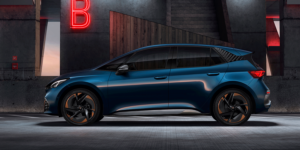 Seat has now presented the production version of the Cupra Born. The electric car based on the Group’s MEB platform will go into production at Volkswagen’s Zwickau plant from September this year. The technical data, however, differ slightly from the known MEB models.

Seat did not give an overview of the variants in the press release, but announced a range of up to 540 kilometres according to WLTP and a small increase in performance for the top model with the familiar 77 kWh battery: With the optional “e-Boost”, the power should be able to be increased to 170 kW for a short time – but the Spaniards do not specify how long the Born can hold the 20 kW boost.

The Cupra Born’s other specifications are based on those of the VW ID.3: So depending on the battery, 110 or 150 kW output from the rear engine, plus the three battery stages with 45 kWh, 58 kWh or 77 kWh usable energy content. In the case of the Cupra, this should provide a standard range of 340, 420 or the aforementioned 540 kilometres – according to preliminary data. The 110 kW are available with the small battery, the 77 kWh model is only available with 150 kW. With the 58 kWh battery, customers can choose the engine power, which does not change the preliminary range specification.

Cupra does not give any information on charging power in the announcement – but with the announced start of production in September 2021, it is very likely that the Born will receive the latest improvements of the ID.3 – i.e. 110 and 120 kW DC charging power for the small and medium battery options, respectively. For the large battery, it is 125 kW at a corresponding DC pillar so far, but here the rumour persists that up to 170 kW will be made possible this year.

In order not to compromise on range despite the sportier design and chassis set-up, the Spanish have made the bodywork a little more aerodynamic: The Born is three centimetres flatter (1.54 instead of 1.57 metres) and, at 4.32 metres, six centimetres longer than an ID.3. The load compartment, on the other hand, is 385 litres, exactly the same volume as the VW model.

In addition to the “e-Boost”, the Cupra Born is supposed to stand out from the somewhat well-behaved ID.3 design both inside and out. The vehicle shown at the presentation is painted metallic blue and picks up the Cupra-typical copper accents on the logo, the front grille and the rims. At the rear, there is a suggested diffuser to emphasise the sportiness.

The copper theme is also taken up in the interior, for example on the air vents, some steering wheel knobs and also the decorative stitching on the steering wheel. The cockpit itself adopts the familiar MEB layout: a larger, freestanding tablet-style touchscreen in the centre, a small driver’s display with all the important data behind the steering wheel. The graphics, however, are not as sober as on the corporate brother from Wolfsburg. As in the ID.3 (but different from the Skoda Enyaq), the rotary gear selector is located to the right of the driver’s display.

There is one difference with the seats: The bucket seats are made from recycled marine plastic, probably mainly old fishing nets. The optional head-up display with augmented reality function, on the other hand, comes from the Group’s modular system. As with the ID.3, the heat pump will also only be offered as an option. In the VW, this extra costs 1,275 euros; there is no price list yet for the Cupra.

The trade magazine Auto, Motor, Sport assumes an entry price of “just under 30,000 euros” based on the known VW prices and the previous Cupra pricing policy. The comparable ID.3 Pure is listed at 31,960 euros. The Cupra Born with a large battery is estimated by the German publication Auto, Motor und Sport “at least 42,000 euros”. To compare, the ID.3 Pro S costs at least 42,460 euros.

Direct vehicle sales, however, are only part of Cupra’s sales strategy. “Through its emotional sportiness, we want the next generation of young challengers to be part of this transformation,” says Wayne Griffiths, head of VW’s two Spanish brands. “That’s why CUPRA will use unconventional sales models to reach new people and take the CUPRA brand beyond the traditional.” However, Griffiths did not give details and prices for the planned subscription sales model.

Update 26 May 2021: Only one day after its premiere, the Cupra Born can already be pre-configured in some countries. This also means that the first prices are known. In its native Spain, the recommended retail price for the Cupra Born with 110 kW power and a battery with 55 kWh gross capacity (45 kWh net) is 31,600 euros. Meanwhile, in Germany, this version starts at 32,700 euros.