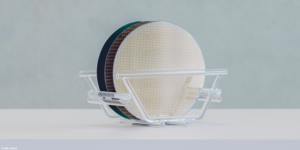 On Monday, Bosch commissioned its new semiconductor factory in Dresden, the construction of which the automotive supplier had begun in 2018. In future, Bosch wants to manufacture chips there on 300-millimetre wafers for the automotive industry, among others.

The factory itself is not a reaction to the current semiconductor shortage, as the start of construction in 2018 underlines. However, it will be some time before chips from Dresden are installed in cars and IoT applications: The first chips are expected to be sold in mid-2022.

The first wafers have already been going through production in Dresden since January 2021, and in March a fully automated production run was completed for the first time. Series production is scheduled to start in July – six months earlier than initially planned and communicated in March. However, the six months only apply to microchips for power tools; for automotive chips, production is to start three months earlier.

Bosch manufactures power semiconductors from the wafers, i.e. wafer-thin silicon plates, which are later used, for example, in DC/DC converters in electric and hybrid vehicles. Such a production process can take several months.

Bosch says it has invested around one billion euros in the factory near Dresden Airport. Federal Economics Minister Peter Altmaier stated that the federal government has funded the construction of the “first fully digitalised and highly networked semiconductor factory” with around 140 million euros.

“Chips for vehicles are the supreme discipline,” says Harald Kröger, Bosch board of management member for the Mobility Solutions business sector. “In no other environment are they exposed to such conditions, to strong vibrations over years and to a wide temperature window.” Since Bosch has been developing its own chips for decades, it has a great deal of know-how.

The site in Dresden is about 100,000 square metres, and Bosch says the total floor space is 72,000 square metres. At the moment, the company employs around 250 people, and it is planned to employ up to 700 people in the final stage of development.

Bosch already has a semiconductor plant in Reutlingen, but 150- and 200-millimetre wafers are produced there. In Dresden, as mentioned, it is new types of 300-millimetre wafers. In addition, the structure width of the wafers produced in Dresden is much smaller than that of the products from Reutlingen, at 65 nanometres. There, it is 180 nanometres for wafers made of silicon substrates and 400 nanometres for silicon carbide.

At the digital opening of the factory, Bosch CEO Volkmar Denner stated that the current chip shortage would drag on into the second half of the year. The fact that it was possible to start production earlier, despite the pandemic delays and initial problems on the construction site, is due to the good networking of the factory, but also of the team on site.