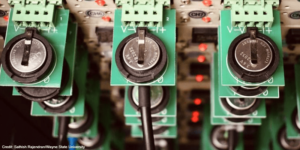 Researchers at Friedrich Schiller University Jena, along with colleagues from Boston and Detroit, have succeeded in preventing the formation of dendrites in lithium metal batteries, thereby at least doubling the service life of such batteries.

Lithium metal batteries could hold double the energy per unit weight compared to lithium-ion batteries. However, hindering the development are lithium dendrites, small, needle-like structures, which the researchers compare to stalagmites in a dripstone cave, forming over the lithium metal anode.

So the team from Friedrich Schiller University in Jena, Boston University (BU) and Wayne State University (WSU) started with a method to prevent the formation of said structures made from atoms deposited during the charge transfer process in the first place. The process is called dendrite nucleation, which the team managed to avoid by applying a thin, protective membrane. The pores of the separator membrane influence the nucleation of dendrites, making the ion transport more homogeneous.

“The key innovation here is stabilizing electrode/electrolyte interface with an ultra-thin membrane that does not alter current battery manufacturing process,” says Associate Professor Leela Mohana Reddy Arava from the WSU.

Her colleague, Professor Andrey Turchanin from the University of Jena, adds the membrane that covers the separator has pores with a diameter of less than one nanometer. “These tiny openings are smaller than the critical nucleus size and thus prevent the nucleation that leads to the formation of dendrites,” explains the Professor. Instead, he claims, the lithium is deposited on the anode as a smooth film.

The team says they have run “hundreds of charging and discharging cycles” without detecting any dendritic growth.

They now filed a patent application for the method. The next step is to see how the application of the two-dimensional membrane can be integrated into the manufacturing process. The researchers say they also want to apply the idea to other battery types.