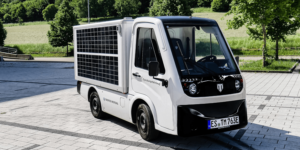 Tropos Motors Europe is testing vehicle-integrated photovoltaics on its box bodies in a pilot project. The photovoltaic elements replace existing body structures and do not add additional weight to the commercial electric vehicle.

The German electric vehicle manufacturer Tropos says that power provided via solar energy will significantly increase the range of their electric vans. As part of the pilot project that will start at the end of June and run for an initial period of four months, Tropos is also examining how the additional electricity can be used. Among other things, the project will test an external power supply that can be used to charge other vehicles or power terminal equipment and batteries for power saws or hedge trimmers, for example.

“We expect this solution to be nothing less than a revolution in the market for electric utility vehicles,” says Markus Schrick, managing director of Tropos Motors Europe. “Initial tests suggest it could work. Now we are testing the technology in detail in real-world operations for performance and further potential applications. We want to analyze in its entirety what benefits the solar panels can have for our customers.”

With their compact dimensions of 1.40 meters wide and 3.70 meters long, and their small turning radius of 3.96 meters, the Tropos Able models can be used both on the road and indoors. In addition to the version with a box body and a load volume of up to 4.5 cubic meters, the Able is also available with a flatbed (single, with tarpaulin or with leaf grille). In addition, the manufacturer distinguishes between the Tropos Able ST (with lead-acid battery and 80-kilometre range), the Able XT1 (lithium-ion battery, 105-kilometre range) and the top model XT2 (lithium-ion battery, 260-kilometre range).

A central feature of the Tropos commercial vehicles is the ‘Easy Swap’ system, which should enable two adults to change the body in just 15 minutes without the help of a crane. This should allow the vehicles to be used more flexibly in a wide range of tasks. For example, in autumn, a parks maintenance company could use the Able XT one day to clean parks with leaf grates and the next day (or even after the lunch break) to transport larger bulky goods with the converted flatbed.

Sales, development and the Tropos headquarters are located in Kirchheim/Teck at the parent company Mosolf, but production assembly occurs in Herne. The SKD (Semi Knocked Down) bodies are supplied by a partner from China, reassembled in Herne and fitted with bodies manufactured in Germany according to customer requirements.

Tropos recently entered into a cooperation agreement with the Hahn Group, one of the largest Volkswagen dealers in Germany. As a result, Hahn now also offers Tropos electric vehicles at four of its German locations – in Fellbach (near Stuttgart), Bietigheim-Bissingen, Pforzheim and Ebersbach. After-sales service is also offered at the four locations.