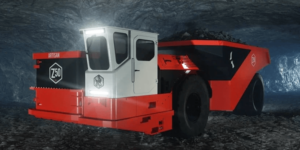 Sandvik has received orders from Canadian customers for battery-electric mining vehicles worth around 140 million Swedish kronor (equivalent to around 13.8 million euros). In addition, the company has secured commitments for Battery-as-a-Service (BaaS) contracts.

The special vehicles ordered are seven Sandvik Z50 50-tonne electric underground dump trucks and two Sandvik LH518B 18-tonne electric loaders. According to Sandvik, the strong order intake is based on successful customer trials. The manufacturer does not give details of the BaaS contracts. In a short statement, only Henrik Ager, president of the Sandvik Mining and Rock Solutions business area, is quoted as saying: “I am pleased to see the high interest among customers in our battery-electric offering, and these orders underpin commitment to a more sustainable mining future.”

The seven Sandvik Z50s will go to Pretium Resources, which will use them to replace its diesel fleet at its Brucejack underground gold mine in northwestern British Columbia. The new units are to be delivered successively over a period starting next month and ending in early 2023. The contract between Pretium Resources and Sandvik also includes an option for an eighth vehicle.

According to the publication Mining, the mining company based in Vancouver, Canada, was convinced by the fact that the dimensions of the Sandvik Z50 are among the smallest 50-tonne forklifts on the market and yet the vehicles generate twice the peak power and only one-eighth the heat compared to their diesel counterparts.

“The implementation of the battery-electric Sandvik Z50 haul trucks is expected to improve operations at Brucejack, including the potential reduction of ventilation requirements and increased haul capacity,” Jacques Perron, president and CEO of Pretium, is quoted as saying in the report.