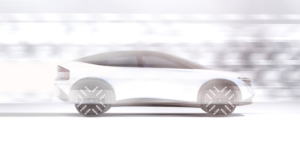 Nissan has shown the first teaser images of its new all-electric crossover model based on the CMF EV platform from the Renault-Nissan-Mitsubishi alliance. It looks like this is the model that will be built at the Sunderland plant in the UK.

In a graphic distributed on Twitter, the side view of a crossover coupé can be seen, in which the curved roof line is particularly striking – the windscreen is kept very flat and the roof falls away again quite early. In addition to the large wheels, the short front and rear overhangs typical of electric cars are also striking.

The portal Carscoops extracted a rear view from a short video in which the crossover model drives through the picture. In addition to a new type of light design, which has nothing to do with the Nissan Ariya, a rather high rear can be seen – in combination with the flat and early ending rear window, this should result in good aerodynamics, but poor visibility.

There are no technical details about the model or a name yet. The vehicle is likely to be the model for which the manufacturer wants to create production capacities for 100,000 vehicles per year in Sunderland, England, as reported. The batteries are to be built in the recently announced cell factory of Envision AESC not far from the Sunderland plant.

The Renault MéganE and the aforementioned Nissan Ariya, among others, are also based on the CMF EV platform of the Renault-Nissan-Mitsubishi alliance. While Renault has so far quoted a range of 450 kilometres for the MéganE with a 60-kWh battery, Nissan wants to offer the Ariya e-SUV with either a 63-kWh battery or a battery with 87 kWh. The drive power is between 160 and 290 kW, depending on the battery and front- or all-wheel drive.

Both battery sizes of the Ariya can be charged with a maximum of 130 kW DC each.