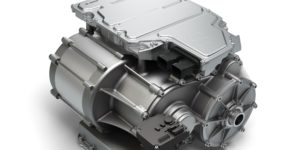 Bosch has presented a CVT transmission with a continuously variable transmission ratio developed in-house for electric cars. With this, Bosch not only wants to improve efficiency and performance compared to the usual single-speed transmissions but also expand the application possibilities of electric cars – for example in trailer operation.

For everyday use, single-speed transmissions are sufficient, as today’s road vehicles prove day after day. Certain applications, however, still pose enormous challenges for the electric drive. The Porsche Taycan and the Audi e-tron GT, for example, rely on a two-speed transmission on the rear axle to achieve the balancing act between the desired acceleration and top speed.

But according to Bosch, a multi-stage transmission in the electric car can also work more efficiently in other situations – when towing trailers, for example, on steep passages with heavy luggage or longer motorway stages at high speed.

Bosch not only claims this but has measured it. A team based in the Netherlands has developed a continuously variable automatic transmission for electric cars. This transmission, called CVT4EV (CVT=Continuously Variable Transmission), has increased efficiency by up to four per cent. It was tested in a converted e-Golf. Depending on the design, the CVT4EV should provide more torque in pulling mode, better acceleration, or a higher top speed, writes Bosch. “The CVT4EV expands the electric car’s repertoire,” says Gert-Jan van Spijk, the development manager responsible for CVT transmissions.

The system, which controls both the transmission and the electric motor, always tries to ensure an optimal balance between efficiency and performance. “To this end, the system can freely control the speed and torque of the electric motor. At low speeds, a smaller gear ratio improves acceleration and handling characteristics on ascents, while a higher ratio enhances efficiency at higher speeds and increases top speed. In addition, it provides increased torque when towing and driving off-road, yet with lower energy consumption. Especially at constant speeds, the CVT4EV reduces the vehicle’s energy requirements,” Bosch describes the system.

The result is that because of the lower speed and torque requirements. It should be possible to use a cheaper and more compact electric motor – with the same or higher power. Or a longer range can be achieved with the same motor. Or, with the same range, a smaller battery could be installed with less use of resources.

Bosch sees another advantage: the drive should be suitable for many applications, from light commercial vehicles to mid-size cars to sports cars. Often, “individual software” would be sufficient to adapt the drives to the application. This could reduce the number of hardware variants, which could reduce costs in development and production.

Incidentally, Bosch favoured the CVT instead of a multi-stage automatic transmission so that there would be no shift jerks. In addition, the CVT can achieve a greater spread, which should ensure an even smoother and more comfortable driving experience.

The concept of the CVT4EV with numerous Bosch components comes from Bosch Transmission Technology B.V., a Dutch subsidiary of Bosch. However, the supplier does not yet provide any information on possible OEM customers.