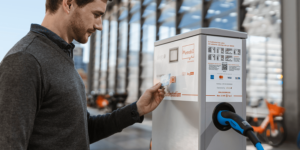 The Dortmund-based charging infrastructure manufacturer Compleo has confirmed that it is negotiating the takeover of innogy eMobility Solutions GmbH with E.On. Officially, a letter of intent for the acquisition of 100 per cent of the shares has already been concluded.

As Compleo emphasises in the statement, the negotiations on the purchase of the European eMobility business of the former innogy SE are exclusive. However, Compleo puts a possible financial framework in which the transaction could take place at a mid-double-digit million euro amount – at least, that is how high the “enterprise value” is estimated to be. After detailed due diligence, both sides aim for a possible conclusion of the contract in the third quarter of 2021 and the closing of the transaction in the fourth quarter, according to Compleo.

The subject matter of the agreement already concluded (“term sheet”) includes the European business of the GmbH, but not the US activities and the charge operator and charging solutions business remaining with E.On SE. innogy eMobility Solutions GmbH has two large locations in Essen and Dortmund.

As Compleo puts it, the takeover is intended to create a win-win situation: E.On relies heavily on integrated customer solutions in the field of electromobility. In contrast, innogy eMobility Solutions GmbH develops and produces its own hardware and software for charging and is thus much closer to the business model of Compleo Charging Solutions AG. In addition, Compleo says it intends to take over all employees and customer relationships.

“We are confident about the prospect of growing together with a very experienced and long-standing market player such as innogy eMobility Solutions GmbH,” says Georg Griesemann, Co-CEO of Compleo Charging Solutions AG. “We value the company’s employees as proven experts in the technological field as well as in the European e-mobility market.”

Following the purchase of wallbe GmbH in spring, the combination with another strong player such as innogy eMobility Solutions GmbH serves to expand Compleo to become the German e-mobility champion in Europe. “With our organic and inorganic growth, we are investing in our future as the German driver for electromobility in Europe and optimising our international market position,” Griesemann continued.

The IPO in October 2020 had brought the company gross proceeds of 44 million euros, and a capital increase in April had provided an inflow of a further 28 million euros.

Compleo Charging Solutions AG (Compleo) today signed an agreement with the E.On subsidiary innogy SE for acquiring 100% of innogy eMobility Solutions GmbH (“ieMS”). Compleo had announced the planned acquisition in July. The purchase price amounts to a mid-double-digit million euro sum; the Dortmund-based charging infrastructure manufacturer does not get more specific in the announcement.

Compleo will pay for the purchase in shares and cash. With the acquisition, Compleo takes over the entire workforce and all customer relationships of ieMS and the subsidiary of ieMS in the United Kingdom. The US subsidiaries of innogy eMobility Solutions GmbH remains excluded from the agreement.

Georg Griesemann, Co-CEO of Compleo Charging Solutions AG, said Compleo and ieMS complement each other perfectly. “By combining our products and experience, we will become a strong full-service provider of charging technology that will play a leading role in the rapidly growing e-mobility market in Europe.” Arjan von der Eijk, CEO/COO of innogy eMobility Solutions GmbH, commented, “The merger with Compleo enables us to meet the needs of our customers even better and thus, in sum, provide even stronger impetus for climate-neutral mobility.”

The transaction is expected to be completed at the turn of the year 2021/2022.

Compleo Charging Solutions has indeed completed the takeover of Innogy eMobility Solutions GmbH (ieMS), as announced. Following the acquisition, Compleo will now fully integrate ieMS and its e-mobility software services into the Compleo Group. This includes taking over the entire ieMS workforce and customer relationships and its subsidiary in the United Kingdom. The US business remains excluded as reported above.

Georg Griesemann, CEO of Compleo Charging Solutions AG, commented, “ieMS has one of the leading charging points management systems in Germany.” He added, “The merger opens up immense long-term growth potential for us as a leading provider of green technologies in Europe’s highly dynamic market for charging solutions.”

Since Compleo was to pay in cash and shares, ieMS previous owner E.On now has an equity interest in Compleo. The latter increased its share capital by 200,000 shares to accommodate the new shareholder and says their share capital now totals €5,069,785.