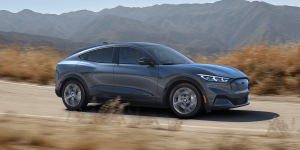 Ford has expanded the range of its Mustang Mach-E in China with a new variant that qualifies for the government subsidy there. The new Mustang Mach-E in the SE edition with rear-wheel-drive and large battery is available from 282,000 yuan (equivalent to around 36,900 euros) after subsidies.

It is now the fifth variant of the electric car to be offered in China, after Ford launched pre-orders for four versions of the Mustang Mach-E there in April. Of these versions – the standard Range RWD, Extended Range RWD, Extended Range AWD and GT First Edition), only the small-battery, rear-wheel-drive model was previously eligible for subsidy – with a base price of 265,000 yuan (33,900 euros). The combination of all-wheel drive with small battery is not sold in China.

Only vehicles costing less than 300,000 yuan are currently subsidised in China. Even the Extended Range RWD was above this limit, as it was only offered in the premium trim. With the new SE model of this drive, Ford now comes under the subsidy limit and to a price of 282,000 yuan before customer.

According to the portal Electrek, the new SE version is said to have a range of 575 kilometres, beating the standard range model by 105 kilometres. Ford itself quotes a range of 619 kilometres, a figure that can also be seen in a photo of a presentation of the model in Shanghai. The 619 kilometres quoted by Ford were determined in the new Chinese test cycle CLTC, the measurement method of the 575 kilometres is not given by in the report. A comparison with the range of the European Extended Range RWD (610 kilometres according to WLTP) is not possible due to potentially different batteries.

The Chinese SE model is a scaled-down version of the Chinese model with a large battery. According to Electrek, features such as the noise-insulating double glazing all around, which otherwise distinguish the premium equipment, have been dispensed with.

Volvo C40 Recharge to launch in the US this year