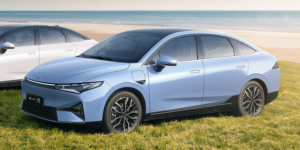 Chinese electric car manufacturer Xpeng has priced its third production model, the P5, to be launched in China in the third quarter of 2021 and delivered in the fourth quarter of 2021. The electric sedan will start at prices starting at 180,000 yuan after subsidies (equivalent to around 23,500 euros).

This means the P5 costs significantly less than the Tesla Model 3 (from 250,900 yuan or the equivalent of 32,840 euros). This comparison is somewhat limited, as Xpeng plans to offer the P5 in a total of six variants. However, even the most expensive version of the 4.81-metre-long sedan remains below the price of the Tesla model at 230,000 yuan. Market observers suspect that the Xpeng has been priced “quite aggressively” in view of the competition with the popular Model 3.

Xpeng had unveiled the smaller electric sedan in April around the Shanghai Auto Show. The vehicle is a smaller sibling of the P7, but in some respects, it is already ahead of Xpeng’s flagship due to ongoing development. For example, while the P7 is available with the XPILOT 2.5 or 3.0 driving assistance system, the P5 will support version 3.5.

The Tesla Model 3 Standard Range for 250,900 yuan has an NEDC range of 468 kilometres, which is theoretically comparable to a P5 460G. In terms of range and the sensors installed, the P5 600P is superior to the 20,900 yuan more expensive Model 3 – for the XPILOT 3.5, among other things, two Lidar sensors are installed, which Tesla rejects for cost reasons.

A comparison with the Model 3 Performance is hardly possible given the driving performance of this model; here Tesla has a unique selling point. The Model 3 Long Range is currently no longer offered in China.

Xpeng is launching its third series model, the P5, on the Chinese market on 15 September. The electric limousine starts at prices from 160,000 yuan after subsidies (equivalent to around 21,000 euros). While a launch in Europe is rumoured, it is unclear when and at what prices the smallest of Xpeng’s lineup will launch there.

Ford is offering a new Mustang Mach-E variant in China