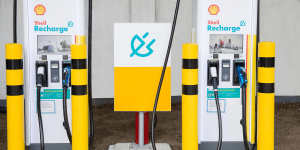 Petrochemical giant Shell announces plans to build hundreds of charging points for electric cars at Waitrose stores in the UK over the next few years. The British supermarket chain specifically plans to host up to 800 charging stations at up to 100 Waitrose stores across the UK by 2025.

Each location is expected to have six 22-kW and two 50-kW charging points for an accumulated 6,400 charge points per site. Effectively the deal will see Shell equip about a third of Waitrose locations with EV charging. The total store network spans 331 shops in England, Scotland, Wales and the Channel Islands.

Shell expects electric vehicle charging to launch at the first Waitrose shop early next year, and the company says it will represent Shell Recharge’s first move into “destination charging”. Customers may then charge their vehicle while shopping.

The companies have also reached an agreement in turn to increase the number of Shell Select stores offering Waitrose food by a further 68 across the UK, bringing the total to at least 125 by 2025.

Last year, John Lewis and Waitrose also announced plans to electrify their delivery van fleet. 1,300 electric vans will be integrated into the two companies fleets in 2021, accompanied by the necessary infrastructure installation at their shop car parks. By 2030, the partners aim to replace all 4,800 vehicles in their fleet with emissions-free transporters.

In terms of wider e-mobility plans, Shell, this April, revealed plans to install 5,000 charging stations across the UK by 2025. The company will use its pit stops as a base for the network and says each of its 500 UK forecourts will see one to two DC charging stations within the next four years. The Dutch corporation also wants to grow the number and size of charging parks along motorways.