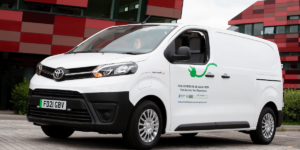 Nottingham also added another three Toyota Proace vans to the council’s own vehicle fleet. The new test fleet is part of Highways England’s EVE scheme that sees the government agency handing £9.3 million to local authorities to encourage businesses with diesel van fleets to convert to electric. The scheme works by offering the businesses a free trial of electric vehicles for two months.

In Nottingham, the City Council uses the EVE programme with loan times that can vary up to 30 days. The scheme is open to voluntary and public sector organisations as well as private businesses in Nottingham.

Nottingham Councillor Sally Longford, Deputy Leader and Portfolio Holder for Energy and Environment said: “The Electric Van Experience is a great opportunity for local businesses and organisations to test drive a range of vehicles.” She added, that the Toyota Proace was an “obvious choice – with a high capacity battery and one tonne of payload.”

The Toyota Proace Electric van is available with a choice of a 50 or 75kWh lithium-ion battery, giving a range of up to 205 miles. Fast-charging to 80 per cent battery capacity can be achieved in less than an hour and there is no compromise in load-carrying ability or payload, according to Toyota.

The vans were purchased through the council’s ULEV procurement framework and will be maintained by Nottingham Electric Vehicle Services (NEVS), an exclusive service centre run by the council.

The city has ambitions of becoming the UK’s first carbon-neutral city by 2028 with the EVE being but one initiative. In January 2020, Nottingham also started a trial to charge e-taxis wirelessly for example and provided the test cabs free of charge to drivers.

The Electric Van Experience has been funded with a £2.69m grant from Highways England. Highways England’s Customer Services Director, Melanie Clarke, said: “Our work with Nottingham City Council is just one example of us working with local authorities across the country to encourage businesses to make the switch to electric vehicles.”

Councils in Coventry, Kent, and Sheffield are also busy setting up their schemes.