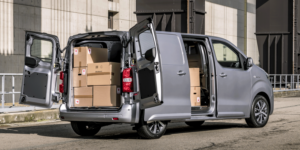 ++ This article has been updated. Kindly scroll below. ++

Prices for other European nations have not been revealed yet; however, Proace Electric was initially introduced to European markets Norway, Netherlands and Switzerland in the fourth quarter of 2020. In the first quarter of 2021, Toyota also envisions launches in Denmark, Finland, France, Germany, Italy, Spain, Sweden and the United Kingdom.

The Proace is not based on a Toyota platform but the EMP2 from PSA/Stellantis. Thus, the minibus is another offshoot to the three well-known models of the PSA brands Citroën, Peugeot and Opel. The Proace Electric is the commercial vehicle version (comparable to the Opel Vivaro-e). The Proace Verso Electric is the passenger car model for private customers, like the Opel Zafira-e Life.

The technical data matches the PSA trio: The 100 kW electric motor is used, Toyota also offers two battery options (50 or 75 kWh). Depending on the battery, between 230 and 330 kilometres WLTP range, depending on wheelbase and battery between 1,000 and 1,200 kilograms payload. Toyota also offers the three-phase 11 kW on-board charger as an option; a single-phase 7.4 kW charger is fitted ex-works. The 50-kWh battery can be charged to 80 per cent in about 30 minutes at a 100-kW charging station, the 75-kWh battery in about 45 minutes. The top speed is 130 km/h.

The Proace Electric will not only be offered in the familiar three lengths (4.60 metres, 4.96 metres and 5.30 metres) but also panel van, crew van and platform cab body styles. As with the PSA models, only the two longer versions can be ordered with the optional 75 kWh battery.

For the passenger car version Proace Verso Electric, there are also three lengths, but the further distinction relates to the various seat configurations. There will be a family model, a shuttle version with up to nine seats, an estate model (mix of seats and cargo space) and a VIP version.

Strictly speaking, the Proace City Electric is not another offshoot of the minibus but the smaller PSA high-roof station wagons – such as the Opel Combo-e. The 100 kW engine is also used here, but only in combination with the 50 kWh battery. Toyota, much like the PSA brands, has not announced prices yet.

Update 04 May 2021: Toyota has added details on the Proace City Electric, which will follow the recently launched larger Proace Electric and Proace Verso Electric models in Europe from the fourth quarter of 2021. The 100 kW motor and 50 kWh battery specifications were previously announced. However, new information regarding the different variants, the payload, the AC charger and the market launch have now been revealed.

The vehicles will be released in a phased model in Europe, beginning with France, the Netherlands, Norway, Switzerland, and the United Kingdom from the fourth quarter of 2021. “Other markets will follow in the course of the year and 2022.”

The Proace City Electric vehicle – essentially a high roof station wagon – has a targeted WLTP range between 260 and 280 km when fully charged and a top speed of 135 km/h. The lithium-ion battery is located beneath the load compartment floor and features 216 cells organised in 18 modules. It has said 50 kWh capacity and comes complete with a glycol water-cooling system that Toyota says is refreshed by a cold loop device and warmed by an electric heater.

There is a ‘B’ switch in addition to the e-toogle to activate additional regenerative braking energy mode for range gains. In Power mode, acceleration from 0-100 km/h can be done between 11.2 and 11.7 seconds depending on the version, and from 80 to 120 km/h between 8.9 and 9.4 seconds.

Charging happens standard with a 7 kW single-phase onboard charger or can be optionally specified with an 11 kW tri-phase charger. Type 2 cables for connection to a domestic power supply or a wall box charging system are also supplied. The 7 kW charger can fully charge the battery in 7.5 hours. With the three-phase 11 kW charging cable, the charging time is reduced to five hours. When the vehicle is connected to a public or business 100 kW DC fast charger, an 80% charge can be achieved in just 30 minutes, says Toyota.

Toyota says that following the recent launch of the Proace Electric and Proace Verso Electric medium-duty van and people carrier as detailed above, the incoming model will strengthen its position in vehicle electrification.

The EV models match the load capacity of the Proace City models, with up to 4.4 m3, plus up to 800 kg payload and 750 kg towing capacity.

Toyota targets a powertrain mix of more than 10% zero-emission vehicle in Europe by 2025.