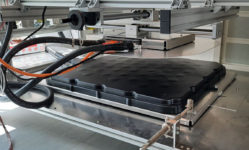 Sprint Power is leading what they say is a multi-million-pound UK government-backed project that aims to demonstrate the suitability of wireless charging technology for fleet vehicles. The trials will start next month for 6-8 months in Leeds, Nottingham and Warwick.

The project called Project AMiCC (AMiCable Charging) involves trials with eight modified Nissan Leaf and Nissan ENV200 to evaluate the benefits of using wireless charging systems for security, estate and pool car fleets. The goal is specifically to monitor the benefit of wireless charging in circumstances when there are more frequent shorter stops.

For this project, Sprint Power says they have developed a series of advanced wireless charging modules ahead of the trial. This involves an electrical distribution system (EDS), a power distribution module (PDM), and a high voltage harness assembly that make it possible for a fleet of vehicles to charge wirelessly via pads attached to the ground.

During the trials, an AI (artificial intelligence) machine learning algorithm will capture information such as vehicle movement and optimum charging behaviour. The drivers will also report back on their experiences using the technology. Sprint Power says that key success factors will include user acceptance, the readiness of the technology and its reliability.

Sprint Power says the trials will supply information that will be shared with the UK Government. If the trials are sufficiently successful, these results can be used to inform a code of best practice that could subsequently be implemented by industry.

In January last year, Sprint Power was involved in a wireless charging pilot with taxis in Nottingham that lasted six months using taxis from both LEVC and Nissan.