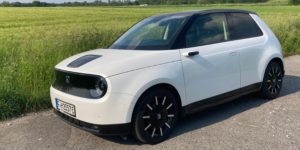 Meet the Honda e, the chic small car which the company packed full of hi-tech before bringing it to market. Last year, the electric car made a convincing first drive, considering the concept’s specifications. But what does the Honda e deliver in everyday use today?

We took the Honda e to the test. Not just a first-drive review but a test under real-world conditions in everyday use. Sure, even 14 days with a car do not provide the same impressions that a frequent driver with several thousand kilometres per month gathers – but they come close, and much closer than those from a short test drive over 100 or 200 km carmakers usually allow.

This time, Honda provided a Honda e Advance, i.e. with 113 kW instead of 100 kW of power and slightly better equipment than a base trim model.

Regarding the consumption figures that follow immediately, we must mention that the outside temperatures in Germany were mostly above 30 degrees during the test period – with 37 degrees at the peak. Thus, the air con had to draw some power, but overall, the AC usually has a much lower impact in summer than heating in winter.

During our consumption test drives, the Honda e came to 13.9 kWh/100km in city traffic across Düsseldorf with a maximum of 80 km/h on A or B roads. The country road round resulted in consumption of 15.6 kWh/100km according to the on-board computer. The display varied between 21 and 23 kWh/100km on the highway, depending on the speed.

In pure city mode, up to 250 kilometres could be possible with the 35.5 kWh battery if the conditions are right. However, if the driving profile includes a lot of motorway driving, the range drops to about 150 kilometres with our test consumption, and it would probably be less in winter. So it turns out that the driving profile is decisive for the consumption, and thus the range.

As Honda indicates, range was not even a focus during development. “The daily driving range is 40 kilometres, so for a city car, from our point of view, this battery size is enough,” said Takahiro Shinya last January at the launch event in Valencia. “Instead of more cells, the fast-charging capability was clearly more important to us.”

So we’re putting it to the test – off to the fast charger. But the fact that fast-charging capability was a development focus shows only to a limited extent. Under optimal conditions, Honda claims up to 60 kW charging power; according to the display, we only achieved 50.2 kW at an Alpitronic Hypercharger HYC300. Between 20 and 25 per cent SoC, there was a peak of about 50 kW. At 28 per cent, it was only 43 kW. The Honda maintained this level in the test until around 50 per cent, after which the charging power dropped to around 75 per cent to 33 kW.

According to the charging station display, we were able to charge 17 kWh in 29 minutes (i.e. 35 kW on average) – if you subtract around ten per cent charging losses between the charging station and the battery, around 15.3 kWh actually ended up in the car. Roughly speaking, that’s enough power for 100 kilometres on our road consumption. This means that the Honda e beats the recently tested Mazda MX-30, which uses a similar battery and range concept. On the other hand, a BMW i3 120 Ah that is a few years old has a slightly larger battery but charges very consistently at 50 kW – and does not already regulate the charging power at a 28 per cent charge level.

Range is no problem for short distances – with its own charging point.
The maximum charging power at an AC charging station is 7.4 kW, which results in a charging time of 4.1 hours (to 100 per cent). If the unbalanced load regulation takes effect and only 20 instead of 32 amps can be used, the charging time rises to over 6.5 hours. The charging process takes a whole 18.8 hours at a household socket.

This means that if you have regular and reliable access to an AC charger with the Honda e, the range for short trips is not a problem – the battery is filled up again overnight or during working hours. Then you can commute 50 kilometres on the highway at 130 km/h even in winter without having to worry about range.

Of course, it’s a different story for on-street parkers or those who regularly have to drive long distances. Charging with 60 kW DC for a 35.5 kWh battery may sound tempting in the brochure. Having to pause for half an hour for 100 kilometres because of the charging curve, not so much.

A car for 2030 realised with today’s technologies

The assessment depends on how you look at it: For some, the Honda e simply has too little range, also measured by its price (more on that in a moment). For others, it is exactly the right vehicle concept and proof that there simply aren’t enough AC chargers installed nationwide yet.

The basic idea of the model: a vision of the car of 2030, implemented with the technologies available today. The postscript is important for the powertrain; developments in batteries and infrastructure will indeed change in the coming years.

This basic idea can also be found in the interior: Camera exterior mirrors, large displays, chic materials. The grey fabric of the seats and the wood-look panel have a high-quality feel. And even after 14 days in the Honda e, we can say that camera exterior mirrors are quite possible with the “technologies available today” – they didn’t interfere at any time, even at dusk with the sun low in the sky or the dark, the camera image was easy to see, and the monitors are positioned correctly. The interaction with the blind spot warning system also worked without any errors and was intuitively understandable for every driver.

However, technology development will perhaps show whether they are actually useful. At the presentation of the EQS, which is, after all, the most aerodynamic production car in the world, Mercedes explained that it had deliberately decided not to use camera exterior mirrors. Although the technology would improve aerodynamics and minimally reduce fuel consumption, the overall system with its weight and the energy consumption of the cameras, control units and monitors would have consumed more energy than the reduced aerodynamic drag saves. However, Stuttgart said it was keeping an eye on the development of the technology. There is no statement from Honda on the overall energy balance of the camera system.

In other places, however, there are better solutions even with technologies available today. Take route planning, including charging. For example, while the car was at a fast-charging station (with 139 kilometres of the remaining range displayed at the time), we started route guidance of about 400 kilometres. In classic Navi system fashion, it displays three alternative routes. If you select one of the routes, you are informed that the range is insufficient to reach the destination. However, instead of suggesting suitable DC chargers along the route, the system displays five charging stations (including AC charging points) around the current location – even though the car is charging at an HPC, as mentioned. This is neither helpful nor useful in 2021 or 2030.

There is also room for improvement in voice control: You can activate an AI-based voice assistant via one of the two touchscreens or the “Ok, Honda!” command. Apart from minor comprehension difficulties, this worked quite well. However, the voice button on the steering wheel does not activate the AI assistant, but a rather old-fashioned voice control that does not want to be operated with complete sentences but rather memorized commands. The quality of the pronunciation also differs between the two systems.

Space could be better utilised

Is voice assistance a buying criterion for an electric car in 2021? Probably not. Rather, factors such as consumption/range, driving behaviour (agile and sporty) or comfort (chassis rather tight, noisy in the interior at highway speeds typical of small cars) count. Or electric details like recuperation, in the Honda one-pedal driving, electric details like recuperation are possible at the push of a button. Alternatively, recuperation can be adjusted in steps via the shift paddles on the steering wheel.

The chassis concept is also likely to be important for many car buyers. Here the Honda e offers some advantages, such as the very low turning circle. However, the position of the charging port in the centre of the front hood was very often criticized in the comments on the driving presentation. In the test, even the heavy liquid-cooled HPC cables could be plugged in and unplugged without any problems. However, the test took place in summer – we can’t comment on how it looks during a charging process with continuous rain or snowfall.

One disadvantage of the body concept with its relatively conventional proportions is the space economy of the Honda e. This is generally not a problem for one or two people, but on the back seat, legroom and comfort (also due to the acute knee angle) are very limited – not only for adults but also for older children. At least there are two Isofix mounts in the rear. Since the Honda e has a rear motor, the loading sill is high and the trunk small; it is also somewhat angled due to the rear wheel arches. There is no frunk under the front hood – so the charging cable has to go in the small trunk. With a length of 3.89 meters, other models offer more space and practicality.

Then there’s the price: the Honda e prices start at 33,850 euros or an even 38,000 euros with the Advance package. After deducting the German subsidy, that’s 24,280 and 28,430 euros respectively. A lot of money for a small car with a lot of technology but limited practical benefits. Especially since the competition in this segment offers better value for money.

However, those who favour a Honda e usually do not do so out of considerations of practical value. They like the design or the interior with its five monitors. There is no question that there is a niche for premium commuter cars. It’s a market that can be served, and, within the specifications for range and charging performance, the Honda e does that well.

For a company that only tightened its e-targets in April, there could have been more since the Honda e debuted. A second BEV, possibly a sportier coupe based on the Honda e, is not due until 2022. As a four-meter-long two-seater, it will probably not be a volume model either. A more practical small car with the space and variability of a Honda Jazz has not yet been announced.

VW rumoured to release entry-level MEB vehicles as of 2024