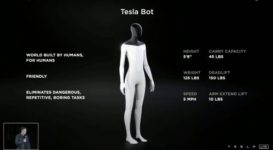 Elon Musk has announced that Tesla will launch a “Tesla Bot” prototype in 2022. Musk the robot will be able to do tasks like grocery runs, picking up household objects, and other everyday commands. Musk says he expects to have a prototype ready by 2022.

The robot will be 5 feet 8 inches tall and 125 pounds. The Bot’s face will be a screen to display useful information and it will have human-level hands. The Bot’s limbs operate using 40 electromechanical actuators with force feedback sensing for agility and balance.

Tesla will also repurpose some of the Tesla’s AI devices that are operational in Tesla’s cars for the new Bot. Not surprisingly, Autopilot cameras will become the Bot’s eyesight and the Bot’s internal organs will be made up of a Full Self-Driving computer. Tesla Bot will utilise multi-camera video neural networks while Neural Net planning, labelling, simulation and tools will also be used to help Mx Bot perform tasks accurately.

Musk joked that it may be able to run up to 5 MPH.

Partial recall for the Audi e-tron