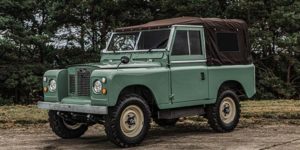 The UK-based EV conversion specialist Everrati has revealed its latest addition to its line-up: an electric conversion of the Land Rover Series IIA, giving the 60-year old classic a second life.

The Land Rover Series IIA is renowned as a British icon and is one of the most accomplished off-road vehicles ever made since its conception 60 years ago. Initially, the Series IIA set a benchmark as the world’s first four-wheel-drive vehicle available to the public.

The manufacturer states that the vehicle has a range of up to 125 miles, and that the electric Series IIA offers both two and four-wheel-drive modes, as well as hi/low ranges for optimised traction and dynamic ability dependent on the driving environment. This is coupled with a 60kWh battery, and the vehicle is capable of generating 152 hp and 221 ft-lbs of torque. While the company concedes that this doesn’t quite keep up with modern BEVs, they do make a fair comparison to the classic ICE vehicle: “That’s far from the 300-mile range that’s becoming commonplace on premium EVs, but isn’t that far off from the 150 miles a full tank of gas will get you in the 60-year-old IIA.”

“With the unveiling of an electric version of the legendary Land Rover Series IIA, we are continuing to deliver on Everrati’s mission, which is to craft cutting-edge, capable, highly desirable and sustainable cars, each with the soul of an icon,” said Justin Lunny, Founder & CEO of Everrati Automotive, adding: “To do so requires unparalleled attention to detail and technical proficiency, with one eye on ensuring our iconic cars meet 21st century demands, and the other on safeguarding a vehicle’s original character and DNA – both dynamically and aesthetically.”