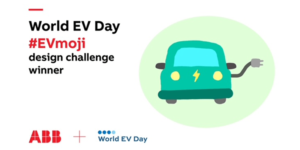 ABB and Green.TV, are calling on the Unicode Consortium to finally recognise the need for an electric vehicle emoji. The ‘EVmoji’ contest launched by the two companies earlier this year also had a rather future-proof target audience.

Only children and young people aged 6 to 16 were allowed to participate as the two initiators wanted to “put the coming generation of e-car drivers in the driver’s seat.”

On World EV Day 2021, ABB and Green.TV now found their winner, the 11-year-old Lucía from Central Europe. According to ABB, her winning design will be submitted to the Unicode Consortium with a request that it be considered in the development of an official EV emoji.

“I’d love my first car to be an electric car because I know they care for the environment,” Lucia said. “I’m very excited to have participated in this contest to help create the first EV emoji!”

The winning design shows a green car with a yellow electricity flash as its trademark. A short charging cable with a two-pin connector protrudes from the right side of the vehicle.

It’s not the first attempt to establish a dedicated emoji for electric mobility, more specifically, electric car charging. In 2019 and 2020, the VW subsidiary Electrify America had submitted corresponding designs to the Unicode Consortium.

The not-for-profit organisation, albeit comprising representatives from all big tech companies, has the main purpose of maintaining the Unicode Standard, which includes the little cartoon-like representations. Unicode also publishes a guideline for submitting new emoji proposals. It is more than 6,000 words long and considers 16 factors and subfactors. It also prohibits submissions resembling trademarks or brands too closely, although (a Ford, ehem) pick-up truck has apparently made it past the provisional round.

Little Lucia’s design should at least be free from such corporate strive in disguise – still, a decision remains outstanding.