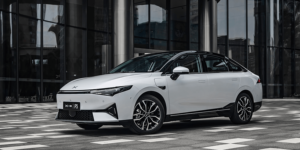 Xpeng has now officially launched its third series model, the P5, on the Chinese market and published the technical specifications and prices in detail. Rumour has it that the high-tech electric car could also be launched in Europe.

In China, Xpeng presented the smaller electric sedan at the Shanghai auto show in April. XPeng is calling the P5 a “smart family sedan,” saying that the zero-emissions car makes a “generational leap in smart EV technology, safety and sophistication for family cars in its class and price range.” The preliminary prices announced in July have now been updated slightly.

Instead of the previously mentioned 160,000 Yuan, the base model is priced at 157,900 Yuan, equivalent to. 20,675 euros instead of 21,070 euros. The most expensive version – previously quoted at 230,000 yuan – is offered for 223,900 yuan (equivalent to 29,485 euros). All prices mentioned are after the deduction subsidies in China. Xpeng has said that binding orders are now possible, and deliveries to customers are scheduled to start at the end of October 2021.

The P5 will be offered in six versions with the designations 460G, 460E, 550G, 550E, 550P and 600P. The numbers correspond to the NEDC-rated kilometre range, the letter in the car’s designation reffers to the version of the driving assistance system: G does not have “XPILOT”, E is version 3.0 and P stands for the latest version 3.5.

The two 460 variants have a 55.9 kWh battery, although Xpeng has not said whether this is a gross or net figure. The 550 models have been given batteries with 66.2 kWh, the 600 models with 71.4 kWh. All versions have an overall output of 155 kW, the drive is said to offer a maximum of 310 Nm of torque and all versions have a heat pump.

The young Chinese company has already revealed the data on the body of the P5: with a length of 4.81 metres, it is only a few centimetres shorter than the large P7, the width is given as 1.84 metres and the height as 1.52 metres. Compared to other pure BEV models, the wheelbase of 2.77 metres is relatively short for a 4.81-metre-long car. Xpeng gives the cW value as 0.223. The boot in the rear holds 450 litres, and there is also a 70-litre cargo compartment and 26 smaller storage compartments in the interior.

According to Xpeng, the P5 is to distinguish itself above all through its autonomous driving functions and its connectivity. The manufacturer itself speaks of a “groundbreaking smart car” and the world’s first series-production vehicle with “automotive-grade lidar technology”. For connectivity, Xpeng has developed its own ‘Xmart OS’.

Based on customer feedback from the P7, Xpeng says it has decided to increase driving and interior comfort. In the powertrain and chassis, an “extensive NVH suppression” (noise, vibration, harshness) system with 32 hollow partitions and 40 noise-dampening cotton pads is said to provide a smoother ride. In addition, the upholstery of the seats has been improved and wider headrests have been installed.

“With the P5, we have achieved a new level of sophistication and technological advancement in China for smart EVs at a competitive price point,” says He Xiaopeng, Chairman and CEO of Xpeng. “We believe this is an age of intelligence and that intelligence will redefine mobility as a whole. Now we have made the best-in-class smart family sedan available at a price of 200,000 yuan, bringing some of the most advanced driver assistance functionality to China’s vast and fast-growing middle-class consumer base.”

According to our colleagues at Electrek, Xpeng also has plans to bring the sedan to Europe. In a “discussion with Xpeng executives”, it was apparently said that the P5 had to be optimised for international markets. The electric carmaker also wants to draw on the experience with the P7 in Norway.

These changes for Europe will probably mainly only affect the software. Here, it should be ensured that the voice control works and that the operating system can handle the different languages. The streaming content will also have to be designed differently. Another important point for integration into European markets is the autonomous driving functions since these require new map data and different legal conditions.

Although there is no timetable for a European debut yet, it is possible that the autonomous functions will be added later via an update. A possible price range for Europe has not been revealed. Xpeng executives have also apparently confirmed that there are no plans to launch the model in the US.

All-electric BMW i5 should hit markets in 2023