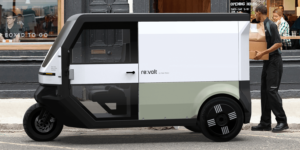 The new van for the last mile is supposed to offer a range of up to 400 kilometres and go into production from autumn 2022. The range specification includes 100 to 130 kilometres due to electricity generation via the vehicle’s solar roof. So when the sun is not shining, the radius is much more limited – the Swedish company gives a range of 70 to 280 kilometres without solar support. According to the Clean Motion website, pre-orders for the Re:volt will be accepted “soon”. The manufacturer is already quoting a price of “from 9,000 euros”.

With its compact dimensions of 3 metres in length, 1.4 metres in width and 1.7 metres in height, the new model should compete in the minivan segment and score as a delivery van with “minimal charging requirements”. Clean Motion gives the power output as 4 kW, the solar cells are to contribute 600 watts. The battery capacity varies between 2.5 and 10 kWh. They do not specify the charging technology, but in view of the small battery, charging from a household plug is likely to be the most common application.

Weighing only 250 kilograms, the Re:volt can carry a maximum load of 700 kilograms. The manufacturer says the load space is 2,500 litres. The vehicle makers say this model is small on the outside but big on the inside and describe the design is simple and functional. Thanks to the modular design, the vehicle can be easily configured according to the customer wishes.

“We are not alone in integrating solar panels into vehicles. What is unique is the energy efficiency of our vehicles, which means that the solar roof can make them self-sufficient in energy,” says Göran Folkesson, Managing Director of Clean Motion. “It also means that with only 40 kg of batteries we can offer a range of 280 km, which will suit northern latitudes where the sun is not a reliable energy source.”

The company’s management team sees potential for the Re:volt especially in urban goods distribution. “The market for environmentally-friendly last-mile deliveries is huge and rapidly growing, but the range of vehicles that can really replace the old fossil-fuelled vans is not that exciting,” Folkesson elaborates. With Re:volt, he says, the company wants to change the image of what a small electric vehicle can do.

Production of the Re:volt is expected to start in autumn 2022. Clean Motion is currently looking for companies with different transport needs to give feedback and contribute to the adaptation of final details. The goal is to create a comprehensive customer offering for the European transport market. As with Zbee, however, there are also plans to offer the Re:volt for local licensed production in growth markets worldwide.

The company’s first electric vehicle, an e-tricycle that can function as both a passenger and cargo transporter, was being targeted at distribution in Indian cities as a means of transport for the last mile in 2016. Indeed, on its website, Clean Motion writes of a business unit called Zbee India that offers an end-to-end solution for the use of electric vehicles, specifically including a clean energy generation system, the installation of charging infrastructure and the transport of passengers via Zbee tricycles. Currently, there is only one cluster of 25 Zbees, but more are in the pipeline, the company says.