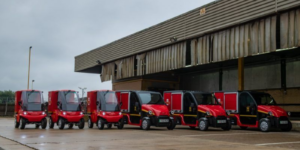 Royal Mail is set to trial two types of micro electric vehicles for letter and small parcel deliveries. These are the Paxster Cargo and the Ligier Pulse 4 vehicles.

The two light electric vehicles will be assessed in residential areas as a potential lower-carbon alternative to larger vans, which are typically shared by two delivery personnel. The trial will assess whether providing access to separate vehicles could provide greater flexibility on busy routes.

The two light electric vehicles, the Paxster Cargo and the Ligier Pulse 4 have load size of between 1.2m3 and 2m3 respectively. With this size, the vehicles can accommodate more than an average daily round’s worth of letters and small parcels. For charging, the vehicles only require a standard three-pin plug.

The two vehicles have been given the bright colours of the Royal Mail postal service and will be trialed over a six-month period in Edinburgh, Crewe, Liverpool, Swindon and London.