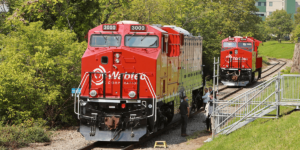 ++ There has been an update to this news, please continue reading below. ++

Wabtec revealed the new battery-electric locomotive at Carnegie Mellon University. The locomotive development is part of a new venture between Wabtec and the University to develop zero-emissions technology to help move the 1.7bn tons of goods shipped on American railroads each year. Wabtec has also announced a collaboration with General Motors (GM) to develop and implement GM’s Ultium battery technology into Wabtec’s freight locomotives.

The new train, the FLXdrive battery-electric locomotive, completed a successful trial run in California earlier this year. This pilot program was part of a $22.6 million grant from the California Air Resource Board (CARB), awarded to Wabtec, BNSF, and the San Joaquin Valley Air Pollution Control District.

The FLXdrive in the pilot contains 18,000 lithium-ion battery cells. This gives the locomotive an energy capacity of 2.4-MWh. The drive manages the overall train energy flow and distribution through its Trip Optimizer system. This is an intelligent cruise control system programmed through artificial intelligence so that the locomotive can respond to every turn of the track in the most energy-efficient way possible.

Wabtec already has a second-generation locomotive with a battery capacity of more than 6-MWh in the works. This energy level can reduce a locomotive consist’s fuel consumption and carbon emissions by up to 30 per cent, even fully loaded in a mile-long train.

In Australia, Roy Hill will be getting the newest version of the FLXdrive battery-electric locomotive in 2023 with an energy capacity of 7 MWh. “We are committed to transforming the next generation of transportation by adopting advanced technologies that improve energy efficiency, lower operating costs and improve our rail and mining network,” said Gerhard Veldsman, CEO of Roy Hill. “The FLXdrive locomotive will be the first for the region and the first for the mining industry and will improve our rail operations from the mine to Port Hedland.”

Simon Pascoe, General Manager of Engineering for Roy Hill. “It has the horsepower to operate in a heavy haul train consist pulling loaded wagons with 35,000 tonnes of iron ore, while at the same time reducing the entire train’s fuel consumption. The FLXdrive also is designed to function in the extreme heat of the Pilbara region.”

Following the above first order from Roy Hill, Wabtec appears to be making a name for its electric locomotive in the Australian mining industry. Rio Tinto, a direct (and larger) competitor to Roy Hill, now opted for four battery-electric locomotives of type FLXdrive.

“The rapid adoption of the FLXdrive by Rio Tinto and other mining operators demonstrates the industry’s commitment to decarbonizing their operations,” commented Rogerio Mendonca, President of Freight Equipment for Wabtec.

Rio Tinto expects the new locomotives to arrive in 2023 to help clean up their rail network in the Pilbara region of Western Australia – the same area Roy Hill operates in. Rio Tinto targets a 50-per-cent reduction in Scope 1 and 2 carbon emissions by 2030.

Based on the route from the mine to the port at Dampier in Western Australia and Rio Tinto’s mainline rail operations, the company expects the FLXdrive to reduce their fuel costs and emissions in percentage by double digits per train.

To start with, the mining company plans on using the locomotives as a shunter in the railyard and ultimately in mainline service. Rio Tinto currently uses three diesel-electric locomotives to pull trains with 240 cars hauling about 28,000 tons of iron ore in mainline operations. The FLXdrives will transition from the diesel locomotives in mainline service to form a hybrid consist and recharge during the trip through regenerative braking and at charging stations. Wabtec’s energy-management software system will determine when best to discharge and recharge the batteries along the route.

The latest version of Wabtec’s electric locomotive has an energy capacity of seven megawatt-hours.