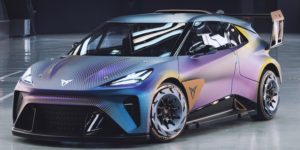 The production version of the ‘UrbanRebel Concept’ by the Seat brand Cupra, planned for 2025, is to cost around 25,000 euros, which is around 5,000 euros more expensive than the VW offshoot of the planned electric small car family.

With the ‘UrbanRebel Concept’, Cupra had shown its own idea of a sporty electric small car. The concept car at the IAA Mobility was a design study, but it was intended to give a preview of the “urban electric vehicle”.

According to Cupra CEO Wayne Griffiths, the car is to be “positioned between the mass and premium segments”. The production version will retain the design language of the concept car, with the exception of the aero components: “The series car is very near to the UrbanRebel. You take the fin off the back and the spoiler off the front, and then you get very very close to what we want to do with the car we want to launch in 2025,” Griffiths said.

According to Automotive News Europe, the electric motor of the production version will have an output of 170 kW. Acceleration from 0 to 100 km/h would be 6.9 seconds. The necessary energy for propulsion is to be supplied by a 55-kWh battery, which should enable a range of 400 kilometres. Like the ID. Life shown at the IAA, the UrbanRebel Concept is based on the MEB Small, a smaller variant of Volkswagen’s Modular Drive System (MEB).

For Cupra and Seat, the 4.08-metre-long city runabout has great significance, especially economically. “The urban electric vehicle is a key strategic project – not only for our company, but for the entire Volkswagen Group,” Griffiths said in early September. “Indeed, our goal is to produce more than 500,000 electric city cars per year for the various Group brands in Martorell. The urban electric car will democratise e-mobility and make it accessible to the masses.”

According to Ralf Brandstätter, Volkswagen’s electric small car will be built in Spain, which accordingly also applies to the production version of the Cupra UrbanRebel Concept. As is well known, Seat wants to produce 500,000 urban electric vehicles per year in Spain from 2025 – not only for itself, but also for other group brands. A battery factory is also to be built there.