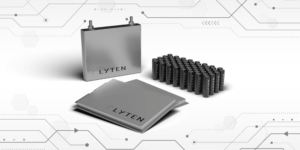 The new battery material company Lyten from Silicon Valley presents a lithium-sulphur battery platform for electric vehicles. With this, a gravimetric energy density of 900 Wh/kg is to be achieved. Lyten expects the start of production and market availability in 2025/26.

Lyten says it laid the foundation for the Li-S platform, called LytCell EV, by working closely with the US government to test the technology for military purposes. The San Jose-based company says it has spent several years testing and improving the platform’s capabilities in selected defence-related applications.

LytCell EV has been optimised specifically for the electric vehicle market and is expected to offer three times the gravimetric energy density of conventional lithium-ion batteries, the Silicon Valley company, founded in 2015, announces. Lyten cites the development of a novel three-dimensional graphene material platform called Lyten 3D Graphene, which took years to refine and can be tuned at the molecular level to meet the specific requirements of battery applications, as crucial to the Li-S breakthrough.

The second achievement Lyten cites is a technology the company has christened Lyten Sulfur Caging. This is the key to unlocking the performance potential of sulphur by preventing the so-called polysulphide shuttle effect – a process that has previously impaired service life and prevented the practical use of Li-S in battery-powered electric vehicles, the Californians say.

Under Department of Defence testing protocols, the LytCel prototype design has demonstrated more than 1,400 cycles, according to Lyten. Other features cited by the company include safe and effective operation at -30 to +60 degrees Celsius, applicability in cylindrical, pouch and prismatic cell formats and in various pack sizes, and a subsequent battery charge time of less than 20 minutes. The Californian company also promised cost parity with internal combustion cars, extended range or alternatively higher payloads, the “lowest carbon footprint of any EV battery” and the elimination of critical materials.

“We have initiated a generational shift from internal combustion engines to BEVs. We are confident that Lyten’s breakthrough battery platform will accelerate mass adoption of electric vehicles due to the performance, range and safety improvements of our LytCell EV™ batteries,” said Dan Cook, CEO and co-founder of Lyten. “By also delivering the most environmentally responsible battery with a USMCA-compliant supply chain, we believe Lyten will enable automakers to more confidently execute their announced electrification roadmaps.”

Lyten says it has more than 260 issued or pending patents on related technologies. The privately held company, founded in 2015, stresses that LytCell battery technology is suitable not only for electric cars, but also for electric commercial vehicles, electric aircraft, commercial aerospace and other applications.

As promising as Lyten’s announcement sounds – that a commercial breakthrough of Li-S battery technology is difficult to achieve is shown, among others, by the case of Oxis Energy. The British company was considered one of the most ambitious developers of the new technology and was aiming for series production of Li-S battery cells by 2023. In May, however, it became public that the battery specialist had to file for insolvency because it could not raise “the investments necessary for the continuation of its product development”. Oxis is now being wound up and the patents auctioned off.