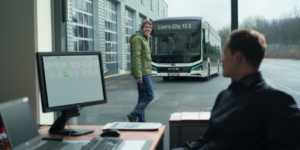 MAN Truck & Bus is restructuring the services in its MAN eManager control tool that was introduced just under a year ago. The tool is a digital command centre for fleet managers who work with the MAN Lion City E electric bus or the eTGE electric transporter.

MAN eManager is based on the cloud-based Rio platform from MAN parent company Traton. According to MAN, the software will be able to charge the battery of the electric bus in time for the start of the journey, and fleet managers will also have access to the room temperature and other vehicle information. The tool enables fleet operators to manage their electric buses and transporters from their desks.

The basic package of the eManager S includes two charging functions (‘instant charge’ and ‘timer charge’), air conditioning in the passenger compartment, monitoring of the charging status (including an error message if a charging cable is not connected correctly) as well as real-time insight into other parameters such as battery charge status in per cent, remaining range in kilometres, charging mode, vehicle status and the time of the last update.

In addition to these basic functions, the eManager M offers further features such as a real-time display of the remaining battery capacity in kWh or more precise information on the vehicle status. Furthermore, this version enables in-depth analyses, such as the average values of driving consumption, recuperation as well as driving distance, which can be created and compared over a certain period of time for one or for several vehicles.

For the MAN eTGE, there is initially a slimmed-down version of the eManager S: With the help of the tool, the current charge and battery charge status, as well as the current remaining battery capacity in kilometres, can be viewed and controlled remotely for the electric delivery van. As a side note, the German truck and bus maker is looking into a solar roof for the transporter with the German solar car startup Sono Motors. A solar roof would further increase the range and sustainability of the vehicle.

Earlier this month, MAN Truck & Bus presented the cornerstones of its new strategy called NewMAN. According to this strategy, the manufacturer that is part of  Volkswagen Group will focus primarily on the areas of electric vehicles, autonomous vehicles and digital solutions. In terms of technology, MAN announced its intention to concentrate fundamentally on zero-emission technologies with a focus on battery-electric and hydrogen. Also part of the strategic plan is the development of autonomous vehicles and the creation of a digital product portfolio to leverage new business potential.