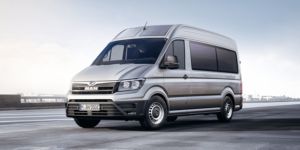 Three vehicles with different body styles will be equipped with Sono Solar technology and investigated by the companies, according to communications from the two companies: the MAN eTGE panel van, the MAN eTGE Kombi with roof-mounted air conditioning and the MAN eTGE with a cooling extension. Published pictures show an eTGE panel van with solar panels on the roof and in place of the rear side windows.

In all three concepts, the focus is either on additional range to be achieved or on a self-sufficient supply of auxiliary consumers, e.g. the air-conditioning system, through the solar energy generated.

Technical data or the targeted amount of energy to be generated per day via the solar surfaces are not mentioned in the communications. It is merely emphasised that Sono Motors’ technology “can also map complex body geometries thanks to its polymer-based construction”. Buses, trucks (trailers) and vans usually have simpler shapes to maximise usable space. However, it can also be an advantage here if the solar panels can be adapted to the body shape – for example, in the roof of the eTGE shown.

“It is a great opportunity for Sono Motors to team up with such a respected industry partner as MAN and to work together for a more sustainable future,” says Jona Christians, co-founder and CEO of Sono Motors. “Our Sono Solar technology offers a lightweight and adaptable platform that is ideal for light commercial vehicles such as MAN’s battery-powered eTGE.”

Dennis Affeld, Senior Vice President & Head of Sales Truck & Van at MAN Truck & Bus, added: “We will combine our joint know-how and expertise to test various prototypes with vehicle-integrated photovoltaic technology. The aim is to find out how much energy can be generated by the PV technology over the year. With this knowledge, we can then evaluate whether the technology is profitable for our customers and at the same time protects the environment.”

What sounds like a single cooperation according to Christians’ statements from the announcements (or is even currently only a letter of intent) could, according to a report in the German publication Der Spiegel, become a second business field for the Munich-based start-up – in addition to the planned but not yet started car production. “We see great potential for this, in principle the technology could be used on trains, ships and cars of all sizes,” Christians told the magazine, which published the article a day before the press releases on the MAN cooperation were sent out. Other cooperations of this kind are to follow soon, according to the report.

Sono already has a cooperation in this field: in January it was announced that the autonomous shuttle EZ10 of the French manufacturer EasyMile would be equipped with Sono’s solar technology. A few weeks earlier at CES, Sono Motors had announced its intention to license its solar technology to other companies. Sono Motors showed a prototype of a solar or photovoltaic trailer for trucks at the CES, which was produced together with the Finnish solar manufacturer Valoe and funded by the German Federal Ministry for Economic Affairs and Energy (BMWi) as part of the evTrailer research project.

Workhorse to use CATL batteries for electric transporters