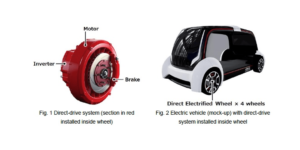 Since the “direct drive”, as Hitachi calls the wheel hub motor, is still under development, only few technical data are mentioned. The power density of the motor is said to be 2.5 kW/kg, and 60 kW is mentioned as the maximum power – in a four-wheel drive with four motor units, this would correspond to a system power of 240 kW, but configurations with two motors are also possible. The maximum torque is given as 960 Nm. The drive itself operates at 420 volts and can handle currents of up to 280 amps.

As mentioned, the inverter, motor and brake are to be combined into one unit that fits into a 19-inch rim. With its “lightweight design”, the drive is not only supposed to “significantly limit” the increase in unsprung masses. Since the drive unit is predominantly placed inside the wheel, the wheel hub motor is said to require “no significant change to the existing configuration of the suspension and other components”. This is justified, among other things, by the weight of components such as drive shafts included in the previous suspension design, which are no longer needed with the new drive.

To achieve this, the Japanese are not relying on a major innovation, but on a series of improvements: The power density of the motor is said to be made possible by arranging the magnets in a Halbach array and using innovative flat coils. According to Hitachi, this should increase the driving force and improve the effective magnetic flux of each magnetic pole. The use of beam welding in manufacturing is said to make the motor lighter. Direct cooling technology, in which the semiconductors are directly surrounded by highly insulating cooling oil, is intended to further save installation space.

Overall, the energy loss is to be reduced by 30 per cent – presumably compared to a conventional drive layout with a central motor and drive shafts, but this is not specified exactly in the press release.