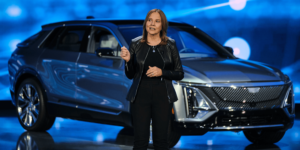 General Motors revealed more details about its plans for e-mobility, among other things, at a two-day investor event. The carmaker not only published its sales plans, but also those for the conversion of its plants.

Basically, according to the plans presented to investors, General Motors wants to double its annual sales by 2030 – and achieve margins of 12 to 14 percent. Specifically, GM expects sales to be at the five-year average of about $140 billion currently. The target for 2030 is therefore around 280 billion dollars. This growth is to be driven by electric vehicles, connected services and new business areas.

Specifically, GM forecasts that sales of electric vehicles should reach the ten billion dollar mark in 2023. By 2030, EV sales are then expected to rise to around 90 billion dollars, the equivalent of 77.8 billion euros. With a targeted total turnover of 280 billion dollars, EV sales would account for around 31 percent.

This does not mean, however, that the other 69 per cent of sales will be generated with internal combustion vehicles: According to CFO Paul Jacobson, the software and new business fields should grow by around 50 per cent per year and thus contribute substantially to revenues alongside the car business. Connected vehicles and new businesses are expected to generate up to $80 billion in new revenue, “with most of the growth accelerating in the second half of the decade as we scale.”

“GM has changed the world before and we’re doing it again,” GM chairman and CEO Mary Barra said of the electric drive. “We have multiple drivers of long-term growth and I’ve never been more confident or excited about the opportunities ahead.”

The new opportunities and businesses include brands such as BrightDrop and Cruise. The commercial electric transporter subsidiary expects sales of $5 billion by mid-decade and potentially $10 billion by 2030, with a margin of 20 per cent. When it comes to Cruise commercialisation, GM expects much higher amounts: By the end of the decade, GM aims to generate $50 billion in annual sales from its autonomous services.

GM also announced plans to increase investment in charging infrastructure to nearly $750 million by 2025, covering all areas, including home, workplace and public charging in the US and Canada. This is expected to significantly improve customer access to “reliable, public charging with the superior customer experience”.

In order to also be able to manufacture the planned electric vehicles, more than 50 per cent of General Motors’ manufacturing sites in North America and in China will be suitable for the production of electric cars by 2030, GM added. GM teased the Chevrolet Silverado, a large pickup truck, as the next model on the Ultium platform. There hasn’t been much to see of the vehicle yet, with a bird’s eye view image showing a large glass roof over the cabin. The vehicle is to be unveiled at CES in January 2022.

General Motors also plans to work with GE Renewable Energy to evaluate ways to improve the supply of rare earth materials, magnets, copper and steel for the production of electric vehicles, among other things. The focus of the collaboration, for which a memorandum of understanding has been signed, is initially on creating a North American and European supply chain for vertically integrated magnet manufacturing – GM wants to use this for its electric cars, GE Renewable Energy for its renewable energy products, such as in generators in wind turbines.

VW takes stock of the performance of the ID.3