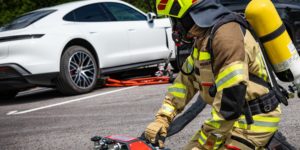 The Austrian-based international fire department supplier Rosenbauer has presented a new extinguishing system for burning traction batteries in electric vehicles. Also in Austria, a study has been published on electric vehicles fires in Austrian road tunnels.

First, let’s go to the Rosenbauer development: The manufacturer claims that the system can be used to extinguish high-voltage batteries based on lithium-ion technology “safely and efficiently”. Efficient, because the system is supposed to enable direct cooling of the battery modules or the cells within the modules and thus a quick stop of the chain reaction of the cells passing through. Safe, because only a short stay at the burning vehicle is necessary for the emergency forces and the system can be activated at a sufficient distance.

When the system is activated at the control unit (from a distance of about eight metres), the extinguishing spike is driven into the battery with a force of several tonnes and the extinguishing water is spread directly inside the battery through the perforated extinguishing lance. The water is then supposed to completely fill the battery casing. Important for the fire brigades is that the amount of water of a “normal TLF/HLF” (i.e. a tanker or an auxiliary fire-fighting vehicle) should be sufficient “to ensure extinguishing success”, according to Rosenbauer.

Rosenbauer says it has tested the system on batteries with pouch cells, prismatic cells and round cells in various vehicle platforms. Various plant fire brigades (including those of the Porsche plant in Leipzig), professional fire brigades and volunteer fire brigades in Europe have also had the system in training, apparently proving with their crews that it is “compatible with existing resources and tactics”.

The battery-powered firefighting system can be ordered now, according to the manufacturer, and will begin shipping early next year.

Another piece of useful information regarding burning electric vehicles also comes from Austria: a team from Graz University of Technology, and the University of Leoben, the Federal Fire Brigade Association and the consulting firm ILF Consulting Engineers Austria, has investigated the safety-relevant effects of fires involving battery-electric vehicles in road tunnels and evaluated methods for fighting fires. Based on these investigations, the hazard potential assessed as not being significantly more critical than in the case of fires of passenger cars with combustion engines.

“Austrian tunnel systems are fit enough for the challenges posed by burning electric vehicles,” concludes Peter Sturm, professor at the Institute of Internal Combustion Engines and Thermodynamics at TU Graz. 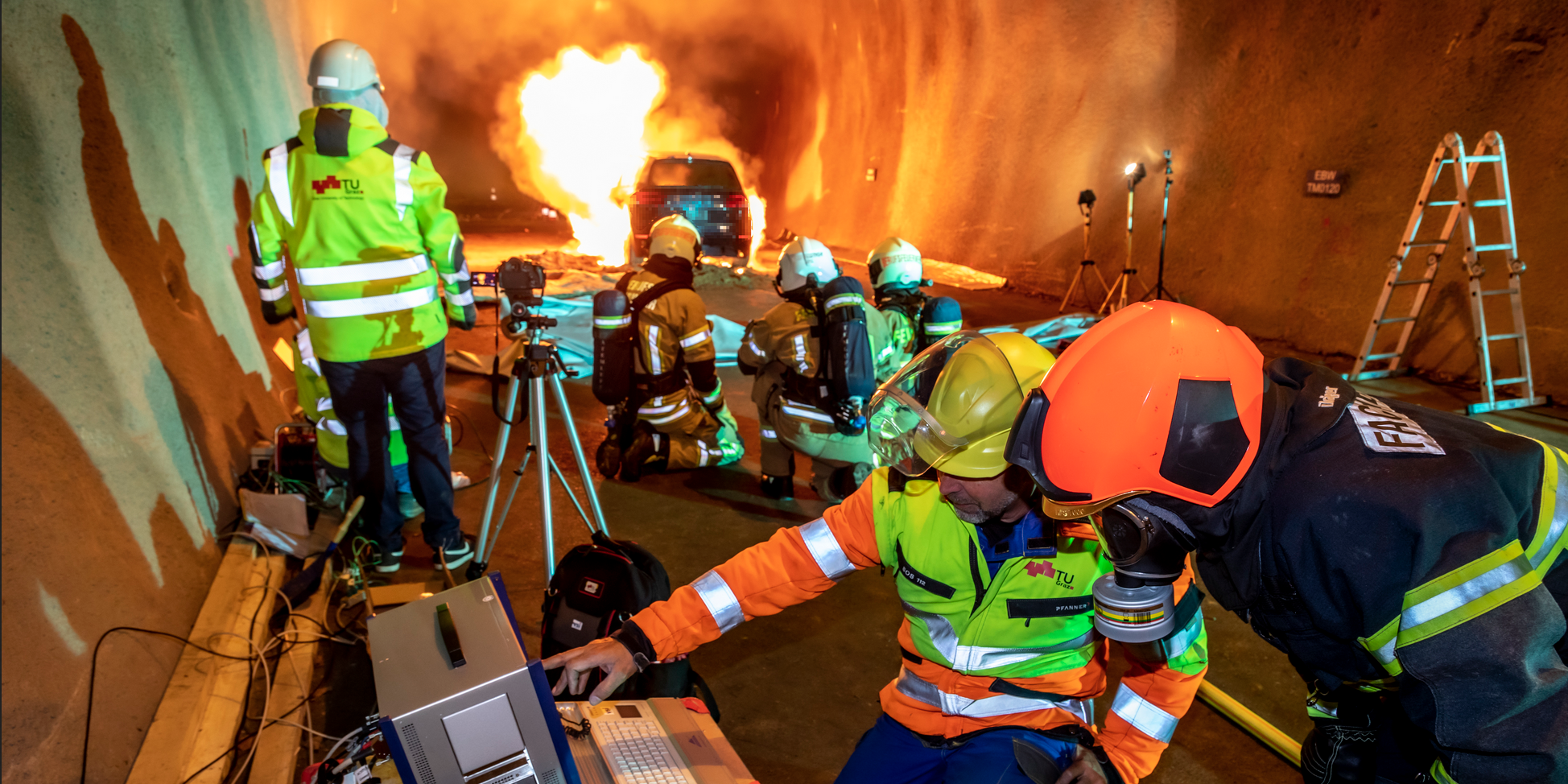 The previous state of knowledge on tunnel fires of electric cars was based on tests with individual battery cells and small battery packs, which was then used to infer the hazard potential of entire burning passenger cars, according to TU Graz. For the current tests, three electrically powered and two diesel-powered vehicles were deliberately set on fire in the new tunnel research centre called Zentrum am Berg at the University of Leoben. Some of the compact cars, SUVs and vans were new cars built in 2020 and thus represent the latest lithium-ion battery technology available on the market.

To simulate the usual time until the arrival of the emergency services, the fires were not extinguished for ten minutes, only then did the waiting fire brigade intervene – but not with the Rosenbauer solution described above. “We were able to gain valuable data in these first ten minutes, after which it was the fire brigade’s turn,” says Peter Sturm.

More than 30 temperature sensors were used to measure the heat release rate, i.e. the fire load of a vehicle. The fire load of a conventional car is about 5 megawatts (MW), or roughly equivalent to a burning stack of 25 wooden pallets. The heat release rate of the burning e-vehicles in the tunnel, at 6 to 7 MW, was somewhat higher than that of the diesel-powered comparison vehicles, but this does not entail any new risks or dangers. Today, tunnels are designed for the fire load of a conventional truck – and this is 30 MW.