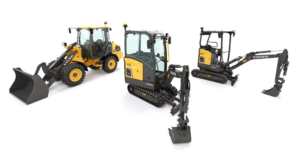 The L20 Electric is a compact wheel loader that sits below the already available L25 Electric. It has a payload of 1.8 tonnes and a parallel lift mast – making the electric wheel loader suitable for fork applications. There is a choice of two battery packs (33 or 40 kWh), the latter of which is said to provide up to six hours of active work.

The two compact excavators EC18 Electric and ECR18 Electric complete the range below the ECR25 Electric. Both excavators are in the 1.8 tonne class. While the robust ECR18 Electric with its short rear radius is designed for confined spaces, the EC18 Electric is even more manoeuvrable. It has a variable undercarriage that can retract to less than a metre and extend to as much as 1.35 metres, allowing it to manoeuvre in the tightest of spaces. Volvo says the frame corner, boom and cylinders also stay within the track width.

All compact e-models are said to offer customers the performance they are used to from their diesel counterparts, but are incomparably quieter and with less vibration during operation. The factory-fitted onboard charger can fully charge the batteries in less than six hours. There is also an optional external fast charger that charges the L20 Electric’s battery to 80 per cent in less than two hours; for the two compact excavators, Volvo CE quotes a charging time of 1.25 hours. However, details of the fast charging system are not revealed in the announcement.

“In the near future”, customers of all five electric models (i.e. also of the already introduced 2.5-tonne excavators) will be able to use a new fleet management system. The “Electric Machine Management Application”, or “EMMA” for short, will centrally display key data such as battery level and remaining working or charging time to help customers increase uptime.

The three new models are “the latest additions to Volvo CE’s industry-first commitment to move its range of Volvo branded compact wheel loaders and compact excavators to electric and stop development of new diesel variants”, according to the Swedish company. The move to go electric instead of diesel for its compact machines was announced by Volvo CE earlier in 2019.

“We are proud to be leading our industry’s fight against climate change as the manufacturer with the world’s largest range of electric machines,” says Melker Jernberg, president of Volvo CE. “Not only are we delivering real-world solutions for a more sustainable way of working but we are adding further power to our customers’ business with the widest possible range of choice to best fit their needs.”