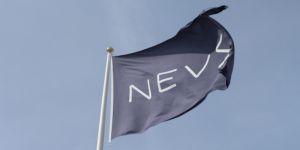 The situation at Evergrande is apparently not yet directly threatening the existence of NEVS: according to Tilk, the company still has financial resources that will last “for a good while”, but there are already talks with several US and European venture capital firms and industry partners regarding a takeover of NEVS.

Financially troubled property group Evergrande has already missed three mail interest payments on international bonds and is trying to sell some of its assets to raise cash, according to a Reuters report. Over the last 3 years, Evergrande has spent several billion dollars to build its own electric car subsidiary, with the vehicles to be launched under the Hengchi brand. To this end, Evergrande had acquired several small and innovative electric vehicle companies as well as larger manufacturers such as NEVS (in an electric re-birth from Saab) or set up joint ventures, for example with the German drive specialist Hofer or the Swedish sports car manufacturer Koenigsegg.

Tilk would not comment on a possible valuation of NEVS, which is part of Evergrande’s electric car division Evergrande New Energy Vehicle Group. Reuters, citing a source familiar with the situation, writes that NEVS could be worth up to one billion US dollars.

Tilk also declined to name possible investors or buyers in the interview with Reuters. “We are in dialogue both with venture people and companies that have the same idea and direction as us and want to get into this with our full competence,” Tilk said. “So they are both industrial partners and venture capitalists.”

Not only NEVS could get a new owner, but also the whole Evergrande New Energy Vehicle Group. This too is on the lookout for investors. Keeping NEVS in the Evergrande Group is also an option, according to Tilk: “If Evergrande can continue its operations, which they hope to do, they will be interested in having a footprint in Europe, with infrastructure like a plant, tests, lab. And we have that,” says the NEVS CEO.

In the wake of Evergrande’s financial difficulties, NEVS had to lay off almost half of its 650 employees in August, as reported. If Evergrande survives the crisis, the Swedish company could also recruit staff again, according to Tilk, “to gain the competence that Evergrande wants in Europe”.

In addition to developing the PONS mobility concept and building its own vehicles, NEVS also plans to contract manufacture third-party vehicles, such as the Sono Sion. Sono Motors told our editorial team in August that the production of the Sion was “not affected” by the restructuring at NEVS. Evergrande New Energy Vehicle, the electric vehicle division of the Evergrande Group, declared a few days ago that it would stick to its plans to produce electric cars.