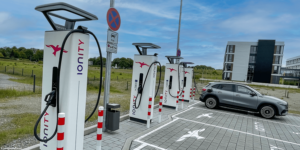 The US investment firm BlackRock is to lead a capital increase of 750 million euros by the Ionity joint venture, which intends to use the money to expand further its high power charging network, German media reports. There is also an indication of the next expansion stage.

Manager Magazin refers to people involved saying BlackRock itself would invest 500 million euros as part of the capital increase. According to the report, the remaining 250 million euros would come from Ionity’s existing owners, i.e. Audi and Porsche from the VW Group, Daimler, BMW, Ford and Hyundai-Kia.

The report does not provide any details on the size of the planned HPC addition. In a presentation by a Porsche representative at an event in Germany, there was talk of doubling the number of sites in the near future. We remember: In the build-up phase, Ionity wanted to realize 400 locations throughout Europe. To date, the company has not quite reached its goal. If the number of sites were doubled, Ionity would operate 800 HPC charging stations in Europe in the medium term. That is not unrealistic.

The fact that Ionity is looking for external investors has been apparent since last winter. As the carmakers involved wanted to accelerate the expensive HPC expansion, they aimed to attract private equity capital. In January, financial circles were talking about “at least 500 million euros.” The major bank BNP Paribas was to help in the search for investors, and names such as Macquarie, EQT, Meridiam, OMERS and IFM were mentioned among potentially interested parties – but not BlackRock.

In summer, French carmaker Renault and Dutch oil multinational Shell were reported to be two of several interested parties. But, as Manager Magazin now writes, Shell as an “undecided bidder” had delayed the talks, and the owners were at odds. Shell wants to expand its own charging network, but whether it will cooperate with Ionity or compete is currently uncertain.

If the information is correct, Renault will not participate in the current capital increase – but that could have a good reason: Since the expansion of the network consumes enormous sums, the next round of financing is already being prepared, according to those involved. Renault is apparently interested in this.

While for the automakers, the HPC expansion is an essential part of the transformation as part of their e-mobility advance, BlackRock takes a different view. “For investors like Blackrock, investments such as Ionity are considered infrastructure assets: low but predictable returns,” writes Manager Magazin.

Tesla wants to triple size of supercharger network by 2023