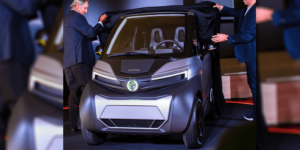 The Spanish electric scooter manufacturer Silence has presented its first four-wheeled electric vehicle. The two-seater Silence S04 is to go on sale next year in two versions at prices starting at around 7,500 euros. At the same time as the S04, Silence has also presented a battery exchange station.

The S04 is a lightweight vehicle similar to a Renault Twizy – but with its appearance and closed doors, Silence is aiming for a more conventional car design. To improve the use of space, the two seats are not arranged next to each other or behind each other, but offset.

The S04 is 2.33 metres long and 1.56 metres wide. Behind the interior with the asymmetrically arranged seats is another luggage compartment. According to Silence, this is large enough to accommodate “luggage, shopping bags and light sports equipment”, but the Spanish do not specify the capacity.

Silence wants to offer the S04 in two versions, one corresponding to the L6e class and the other to the L7e. The L6e version has an output of 6 kW, the engine is installed in the rear. The removable trolley battery has a capacity of 5.6 kWh. Since the maximum speed is 45 km/h, this version can also be driven with a class AM driving licence.

The more powerful L7e version stands out with a larger battery (11.2 kWh), but the motor is also more powerful: the 14 kW should be enough for up to 90 km/h. Silence gives the range in the WMTC (World Motorcycle Test Cycle) as 149 kilometres.

The removable trolley batteries are to become part of a battery replacement system. At the event, not only was the station shown, but the conditions were also mentioned: The service is to cost 20 euros a month.

Silence has not yet indicated when the S04 will be launched on the market. The portal InsideEVs reports, citing sources close to the company, that the S04 is to go into production in the summer of 2022. According to the report, production will take place in Spain, but details are not yet known.

BMW kicks off production of the i4 in Munich