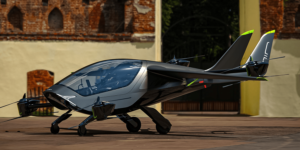 The Israeli flying car start-up Air has presented its first electric flying machine, the Air One. This is an all-electric two-seater eVTOL that is to be sold mainly in the USA from 2024. Pre-orders for the model are already being taken.

Unlike many eVTOL start-ups, Air (formerly Porality Mobility) does not want to build vertical take-off vehicles for commercial air services (the much-cited air taxis), but electrically powered flying machines that are to be sold “directly to consumers, primarily in the United States” from 2024. The idea is that so-called “fly by intent” software will allow buyers to fly without having to be trained pilots. CEO Rani Plaut told Reuters, “Our focus is entirely personal. We’re not talking about commercial flights, we’re talking about people using this (the aircraft, ed.) like a car.”

For the past two years, Air says it has been working with the US Federal Aviation Administration (FAA) to secure certification for the Air One. The Pardes Hanna-based company, founded in 2017, estimates a 2023 approval is realistic. What is known about the two-seat model so far is that it is expected to weigh 970 kilograms and offer a range of 110 miles – the equivalent of about 177 kilometres – at speeds of up to 255 mph (about 410 km/h). The VTOL also has retractable wings for space-saving parking. Air plans to announce the price of the device in early 2022. According to Reuters, the company is aiming for a sum “roughly equivalent to that of an expensive car”.

Currently, Air is busy building prototypes and unmanned tests of its flying device. The startup is also raising additional funds to go through the FAA certification process. Last year, the Israeli company has already received start-up funding of almost 10 million US dollars.

Incidentally, the startup wants to focus more on the United States, as there is enough “large, open airspace” there to launch the Air One. As for demand, CEO Plaut expects to sell up to 15,000 units per year. The number of current pre-orders is said to be in the triple digits.