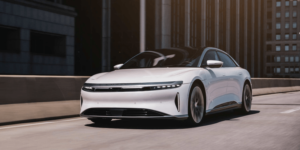 Lucid Motors will begin deliveries of its debut Air model at an event in California on 30 October. The first reservation holders of the ‘Dream Edition’ of the Lucid Air have been invited to take delivery of their vehicles there.

Lucid started production of the Air at the end of September. Lucid initially plans to hand over 520 Dream Edition units to customers, followed by delivery of the Grand Touring versions. The Touring and Pure versions of the Air are then expected to go out to customers in 2022. As of September, the manufacturer has received more than 13,000 reservations.

After the start of production this year, Lucid plans to increase production to 20,000 and 50,000 vehicles in 2022 and 2023, respectively. In principle, the newly completed factory in Casa Grande is to be expanded in such a way that, when completed, it will have a production capacity of up to 400,000 units per year. Lucid had completed the first phase of construction of the plant, with capacity to produce up to 30,000 units of the electric sedan, in December 2020.

To finance the start-up phase, the company has secured a sum of 4.4 billion US dollars via its IPO, which is needed by the end of next year. But Lucid does not want to wait until then to raise further capital. Rawlinson said earlier this month that the capital raised so far “takes us to the end of 2022, so it doesn’t take us to Project Gravity”. Gravity is the name of the brand’s second electric vehicle. The electric SUV is scheduled to go into production in 2023. “This is a capital-intensive business,” Rawlinson explained.

In mid-September, the Californian startup had published official range ratings for its electric sedan by the US Environmental Protection Agency (EPA) for the first time. With up to 520 miles, or 837 kilometres, for the longest-range variant, the Lucid Air has the highest EPA rating for an electric car to date. This top value applies to the Lucid Air’s “Dream Edition Range” with 19-inch wheels. This is a new variant: when it was presented in September 2020, the 588 kW ‘Grand Touring’ model was still listed as the option with the longest range, while the ‘Dream Edition’ had an output of 794 kW according to information at the time.

The Lucid Air ‘Grand Touring’ still has an output of 588 kW. With the 19-inch version, the calculated EPA range is 516 miles, i.e. 830 kilometres – and thus only two kilometres below the provisional value that Lucid had given at the premiere a year ago. With the 21-inches, the EPA standard still allows for 469 miles (755 kilometres).

“Creating the Lucid Air has truly been a labor of love, with customer deliveries representing the culmination of years of endeavor from the entire Lucid team,” expressed Peter Rawlinson, CEO and CTO of Lucid Group. “So I’m truly excited to hand the keys to our first dear customers and accompany them on an inaugural drive through the iconic California countryside.”

From next year, the electric car start-up also plans to deliver its cars in Germany. This was confirmed by head of the German unit Roberto Russo to electrive in July. Deliveries in other European countries are also scheduled to start in 2022.